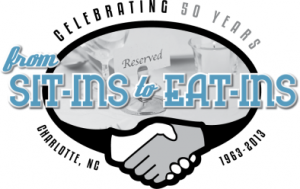 CHARLOTTE, N.C. (AP) - In the spring of 1963, Dr. Reginald Hawkins, a prominent civil rights leader led dozens of protesters on a four-mile march from a predominantly African-American college campus to the center of Charlotte's downtown. He warned city leaders that if something wasn't done to end segregation, future marches might not be so peaceful.

Nearly two weeks later, civil rights and white business leaders quietly joined forces to desegregate the city's upscale restaurants and hotels. In a simple but powerful gesture, they ate lunch together in the restaurants, peacefully opening the door to integration.

The May 29, 1963, lunch was a turning point in Charlotte's emergence as a leading New South city. It contrasted sharply with the massive resistance seen in other Southern cities, such as Birmingham, Ala., where the police chief that same month turned fire hoses and dogs on young protesters. "The city's leadership recognized that there was a need to make necessary changes, but they did not want the violence that happened in other communities to happen here," said Willie Ratchford, executive director of the Charlotte-Mecklenburg Community Relations Committee.

That lunch is being remembered this month with a series of events. On May 29, African-Americans and white civic leaders will discuss race relations at a Charlotte lunch event. The city's community relations board is urging residents to invite someone of a different race to lunch the same day.

Ratchford said while race relations have improved, it's important to honestly discuss the issue. "Many of us think that the racism of the past is no longer here," he said. "We think that way because we don't see it. Back in those days, it was more overt. What we don't realize is it still does happen - but not to the degree that it used to."

Charlotte has long considered itself a major business community. In the years after the Civil War, the city's banks provided capital to help the region's then-flourishing textile industry expand. Today, Charlotte - with 760,000 people - is the largest city in North Carolina and one of the fastest growing in the U.S. The city is home to Bank of America Corp., the second largest U.S. bank by assets, and Duke Energy, the country's largest energy company. In 2012, Charlotte hosted the Democratic National Convention.

But in the aftermath of the Civil War, Charlotte - like most Southern cities - was deeply segregated. African-Americans were forced to attend segregated schools. They were barred from mingling with whites in movie theaters, hotels and restaurants. After World War II, African-Americans returning home from military service began challenging the status quo. 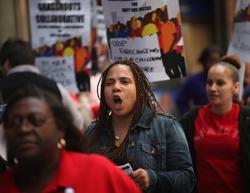 One of the leaders in Charlotte's civil rights movement was Hawkins, a Korean War veteran, dentist and Presbyterian preacher. For years, he led successful sit-ins and protests. He helped escort Dorothy Counts - the first African-American to integrate a Charlotte school - to Harding High in 1957. Scores of white teenagers and adults surrounded her as she walked into the school, spitting and yelling racial slurs.

The stories and photos made national news, and some leaders, including Mayor Stan Brookshire, believed it cast Charlotte in a negative light. They decided to work behind the scenes for change. But change was slow, as it was throughout the South.

Many Southern communities were resisting desegregation. In the early 1960s, civil rights leaders - many of them college students - began dramatic sit-ins against segregated lunch counters. They boycotted retail establishments that maintained segregated facilities.

Hawkins led many of those protests in Charlotte and was successful in ending segregated lunch counters. But in early 1963, racial discrimination was still widespread for African-Americans in Charlotte, Hawkins' son, Abdullah Salim Jr., an attorney, said Thursday.

And a showdown came in the spring of 1963. A major international trade show was headed to Charlotte in April 1963, but Hawkins threatened a massive protest unless hotels and "white-tablecloth eateries" were desegregated. Brookshire brokered the desegregation of key restaurants and hotels with business leaders, and Hawkins called off the protest.

But when the trade show left, businesses reverted to segregation. Hawkins wrote Brookshire to condemn the action. "Unless we come to a full realization and act, we shall continue to have demonstrations led by me or someone else," he wrote. Hawkins then organized a march for May 20: the same day North Carolina officials in 1775 signed the Mecklenburg Declaration of Independence declaring freedom from England. "The sole purpose of the march was to address the ills and conditions that were going on at the time," Salim said. Hawkins ad-libbed a speech. "He declared independence from segregation," Salim said.

In response, Brookshire called a meeting of Chamber of Commerce leaders and urged them to coordinate a voluntary desegregation of hotels and restaurants. The chamber approved a resolution asking that all businesses serving the general public be open to people of all races, creeds and color. But some white restaurant operators were concerned that serving African-Americans might drive away white customers. 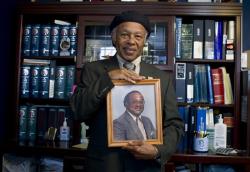 James "Slug" Claiborne, a 30-year-old cafeteria operator, suggested the chamber use sit-in tactics: Let every chamber director invite a black counterpart to lunch, disperse themselves across the city, and do it all on the same day. That would leave no place for offended whites to flee. Claiborne's proposal was adopted, and white and African American leaders lunched at hotels and restaurants throughout the city. Jack Claiborne said his brother was a problem-solver. "He had some appreciation for what black people went through and sensitivity to them," he said. "I don't think he did this out of any ideological idea. He was just, 'Let's solve the problem.'"

The successful desegregation pushed Charlotte in the national spotlight. "There was a lot of one-on-one personal lobbying behind the scenes to get restaurant owners to agree to this," said Tom Hanchett, historian of the Levine Museum of the New South. "It was a success and made national headlines."

Hanchett said Hawkins wasn't invited because he believes white business owners wanted to avoid controversy and the appearance that they were giving in to the civil rights leader. Over the next few years, Hawkins and other local civil rights leaders continued to fight against racial discrimination. Most of the battles were peaceful.

But the calm was shattered Nov. 22, 1965, when the homes of four Charlotte civil rights leaders - including Hawkins' - were bombed. No one was hurt and no one was ever charged. Salim said it didn't stop his father, who ran for governor in 1968 and 1972. He said his father continued to fight for racial equality until his death in 2007. "He battled his entire life for equality," he said.