The Bravery Of WWI African-American Soldiers 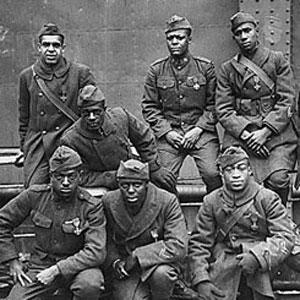 At a ceremony held in France to honor the contributions made by the United States soldiers of color, Jean-Luc Mathieu, a Frenchman whose grandfather died fighting alongside the African American soldiers of the 369th New York regiment, observed: "I am grateful to those men for coming to our country to fight. We never think of them as black soldiers, just soldiers who were brave men." Information/ Photo Credit: mvafricanamericanheritagetrail.org

The Bravery Of WWI African-American Soldiers

It was the war to “make the world safe for democracy.” However, when African-American soldiers returned home after the fighting was over in World War I, they found that the democracy they fought so hard for did not apply to them.

More than 200,000 blacks fought with the AEF (American Expeditionary Force) in France during WWI.

The war, enthusiastically sold to African-Americans by the government-operated propaganda arm, and the Committee for Public Information (CPI) through its publicity materials and speeches by the talking war marketers known as Four-Minute Men, blacks were exhorted to “do their part.” The implied-but-never-spelled-out promise was that things would be different when these African-Americans got home, and that they would no longer suffer the racial prejudices of the past.

The first indication that African-Americans had once again been sold another bill of goods should have become evident during the actual war because the black units were not permitted to fight alongside whites, and so consequently, they fought with French soldiers. However, much to the delight of the French, they distinguished themselves with the all-black 369th Infantry becoming one of the most decorated units of the war.

However, in many other respects officers, gave blacks menial duty, including the deepest, darkest foxholes, and worst jobs. The most important ingredients to a soldier, candy and tobacco, were withheld from the black soldiers and given to the whites.

After the war, the prejudice simply continued, and blacks who wanted to continue their military career were told they were not wanted in the United States Army. Typical of the response was that received by Captain T. Dent at Camp Meade, when he asked to continue in the Army as an officer. His request denied, he was told it was because of “the qualities inherent in the Negro race.”

An officer in the 92nd Division told a group of African-Americans that he would disapprove all applications from black officers simply because of their race. When they expressed doubt, he did it in front of them while they watched.

Then there were the killings. In 1919, mobs lynched ten black veterans still in uniform. The Ku Klux Klan was riding high again, and there is no telling how many black veterans were killed by them and their deaths never reported.

This was the type of greeting that African-American war veterans faced in the United States upon returning home. Sadly, they found that nothing had changed for them.