Lozen: Hero To Her People 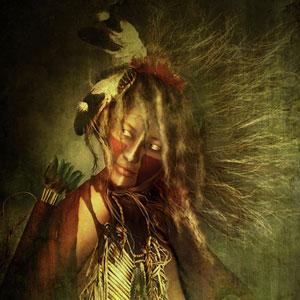 Until recently, American history was a history of white heroes and heroines. While that has begun to change with the inclusion of more African-Americans, other ethnic groups still remain excluded. The story of the great female Apache Lozen, is a prime example of how history still ignores many others.

Lozen was a Chiricauha Apache born in the late 1840s. Her brother was Victorio, a famous Apache warrior. In 1877, Victorio and his band left the San Carlos Reservation in Arizona because conditions were awful and he could not bear to watch his people slowly die. One of those who left with him was Lozen. Early in her life, at her puberty ceremony, she acquired the power to tell where the enemy was. She would chant a prayer and hold her arms out, palms turned upward. As she prayed, she turned, and when her palms tingled intensely, that indicated the direction of the enemy.

She used this power to help Victorio and his band fight once they had left the reservation. Very male-like in appearance and dress, Lozen became a symbol of hope for all Apaches. She could always be counted on, both in fighting, and talking and Victorio commented on how greatly he depended on her.

At one point, Lozen left the band to accompany a mother and her infant baby to a reservation where the infant could be taken of properly. Crossing the harsh Southwestern landscape alone with the mother and child, Lozen was afraid to use her gun because the sound might bring the American cavalry down on them. Thus, she used only her knife to kill animals and provide food for them until they came within sight of the reservation.

However, because of her absence her band blundered into an ambush, and many were killed, including Victorio. Many believed that would never have happened had Lozen been present.

Lozen continued to fight, eventually joining Geronimo in the last of the wars in the Southwest. Eventually she helped convince him to surrender. Lozen was sent east to Alabama, where it is believed that she died of tuberculosis sometime around 1887.

Lozen was a hero to her people. Her obscurity is a good example of the saying that “History is written by the victors.”

There are so many wonderful pieces of history that have remained hidden to the eye. At the same time, there are also many horrific and gruesome stories that have been hidden from sight. This story is a wonderful one, of a hardly recognized hero who deserves to be honored and recognized for her courage. I believe that it is time that we uncover the full extent of our world history. There must be so many heros, so many battles fought, so many lives lost, that have not been told due to oppressive or discriminatory reasons. We need to tell these stories, no matter how heart wrenching or wonderful they are. I believe that everyone deserves to have their story told, and heard.

A few weeks ago, I was presented with the opportunity to watch a film on Eugenics. I am still surprised about all of the stories of oppression that I had never heard about in history books, history class, or otherwise. For example, the film talked about the people of India who had starved because the Europeans wanted to have a feast. The narrator of the film mentioned that the feast would not have stricken so many people with grief, had the European people also not tried to make a profit from the labor of the people of India. The Europeans had forced the people of India to stop farming the crops that they had lived off of for centuries, and instead grow wheat and other cash crops. This European requirement for change was the cause of famine and the horrible death of millions of people.

Just as Lozen was a hero to her people, and may serve as a hero to many others, I believe that there are many other stories of countless hero’s, victors, and people that deserve to be remembered, just waiting to be discovered.

Here is a link to the film on Eugenics if anyone is interested in watching it:
http://www.youtube.com/watch?v=-eX5T68TQIo&feature=related