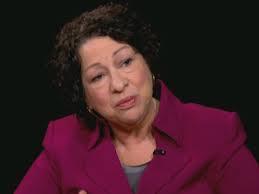 True to form, Supreme Court Justice Sonia Sotomayor this week showed that she was very intolerant of any language, spoken or written, that showed any racial prejudice when she publicly criticized a federal prosecutor for what she called "a racially charged remark" during a drug trial.

According to the Associated Press, Justice Sotomayor's comment came as the Supreme Court "refused to hear an appeal of Bongani Charles Calhoun, who said during his 2011 trial he didn't know a group of men he was with at a hotel were preparing for a drug deal." Calhoun had been convicted and sentenced to prison on drug conspiracy and firearm charges. The 5th U.S. Circuit Court of Appeals had refused to overturn the conviction and sentence after Calhoun sought an appeal.

Justice Sotomayor's criticism of the federal prosecutor came after the prosecutor had framed a question to Calhoun. Assistant U.S. Attorney Sam Ponder asked Calhoun in open court: "You've got African Americans, you've got Hispanics, you've got a bag full of money. Does that tell you - a light bulb doesn't go off in your head and say, 'This is a drug deal?'"

Justice Sotomayor agreed with the decision not to hear the case. But she made it clear that she did not want that decision to in any way "signal our tolerance of a federal prosecutor's racially charged remark." She went on to criticized the prosecutor, saying the statement was "pernicious in its attempt to substitute racial stereotypes for evidence, and racial prejudice for reason. It is deeply disappointing to see a representative of the United States resort to this base tactic more than a decade into the 21st century."

In a joint statement with Justice Stephen Breyer, Justice Sotomayor said, "By suggesting that race should play a role in establishing a defendant's criminal intent, the prosecutor here tapped a deep and sorry vein of racial prejudice that has run through the history of criminal justice in our nation."

Supreme Court Justice Sotomayor proclaimed: "I hope never to see a case like this again."