Black Scottsboro Boys to be Exonerated 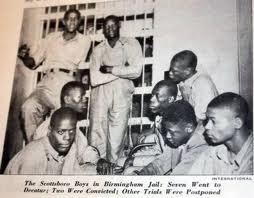 MONTGOMERY, Ala. (AP) - In 1931, Alabama wanted to execute the black Scottsboro Boys because two white women claimed they were gang-raped. Now, state officials are trying to exonerate them in a famous case from the segregated South that some consider the beginning of the modern civil rights movement.

Two Democratic and two Republican legislators unveiled proposals Monday for the legislative session starting Tuesday. A resolution labels the Scottsboro Boys as "victims of a series of gross injustice" and declares them exonerated. A companion bill gives the state parole board the power to issue posthumous pardons.

Republican Sen. Arthur Orr of Decatur said Alabama can't change history, "but that does not that mean we should not take steps today to address things that we can here in the 21st century that might not have been as they should have been."

Gov. Robert Bentley's press secretary, Jennifer Ardis, said he supports the effort to pardon the Scottsboro Boys and believes "it's time to right this wrong."

Sheila Washington, founder of the Scottsboro Boys Museum and Cultural Center in Scottsboro, started organizing the effort after the museum opened in 2010.

The museum chronicles how race and sex intersected in the segregated South on March 25, 1931, when a sheriff's posse stopped a train at Paint Rock. Nine black youths, ages 12 to 19, were hoboing on the train and thought they were being arrested for fighting with whites on the train. Instead, they were accused of gang-raping two white women who were also riding the freight train.

The nine, from Georgia and Tennessee, went on trial in Scottsboro and were convicted by an all-white jury. All but the youngest received a death sentence but later won new trials. One of the women recanted her story. Five of the Scottsboro Boys eventually had the rape charges dropped, while four were convicted during their retrials.

In 1976, the only known living Scottsboro Boy, Clarence Norris, obtained a pardon from then-Gov. George C. Wallace and the state parole board. At the time, there was talk of trying to do something for Andy and Roy Wright, Haywood Patterson, Olen Montgomery, Charlie Weems, Ozie Powell, William Roberson and Eugene Williams. But nothing happened, and then little was said after Norris died in 1989.

Washington called the new legislative effort "a triumph for me."

"It's long overdue. It's almost 83 years old, but the case will never die as long as there is a courtroom to present justice in," she said.

The leader of a group that looks out for the rights of minorities said providing pardons is important, but Alabama shouldn't stop there.

"It's equally important that we ask ourselves today: Are criminal defendants always provided with effective assistance of counsel? Today, are our juries chosen free of racial discrimination? Until we answer yes to both of those questions, the shadow of the Scottsboro Boys will continue to linger and continue to remind us of the importance of doing justice - not just in past times, but in our time," said Richard Cohen, president of the Southern Poverty Law Center in Montgomery.

University of Alabama history professor Tom Reidy, who has written about the Scottsboro Boys, said they should be considered "the beginning of the modern civil rights movement."

State Tourism Director Lee Sentell said civil rights tourism has become an important part of the state's travel business, and the Scottsboro Boys museum is among the attractions promoted by the state. "A positive action like this improves Alabama's image and shows how far our state has come from the days of discrimination," he said.

Joining Orr in sponsoring the legislation are Democratic Reps. John Robinson of Scottsboro and Laura Hall of Huntsville and Republican Sen. Shad McGill of Woodville.