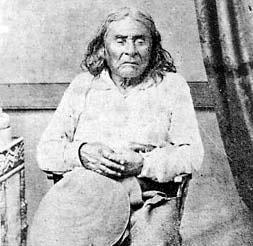 One of the most often quoted historical figures, as well as possibly one of the most well known Native American chiefs in American history, is Chief Seattle or (See-atch, the anglicized pronunciation of his name) from the Pacific Northwest Suquamish/Duwamish. Living in the Pacific Northwest area in the late 18th Century, Chief Seattle left modern America with a number of important quotes still referenced today.

Born in the late 1700s during a time when epidemics decimated entire Native American tribes introduced inadvertently by western traders, Chief Seattle learned throughout his lifetime to take advantage of what the white man offered, but he did so without giving up his genuineness as a Native American. It was also during the introduction of western trade goods and firearms, which added immensely to the problems as well as the good.

In an essay written by David M. Buerge for the University Libraries at the University of Washington called “Chief Seattle and Chief Joseph: From Indians to Icons” he states that Chief Seattle claimed to have been present when the British ship H.M.S. Discovery, captained by George Vancouver, anchored off Bainbridge Island on May 20, 1792.

“The happy memories of the explorer’s visit and his appreciation of the power and abilities of Westerners remained with him all his life,” Buerge wrote regarding Chief Seattle’s feelings for the white man.

Chief Seattle wrote to the American Government in the 1800s, and in many folks minds, gave the “most profound understanding of God in all Things.” An impressive statement for a man whose main goal in his writing was to simply remind everyone of their place in the world.

However, some also hold him to blame for the outcome of the Pacific Northwest Indian tribe’s eventual downfall. A paper published in the “American Indian Quarterly,” written by Klallam Tribal Leader, Phillip Howell, assesses Chief Seattle’s legacy, as him being “a low type of Indian, a joke among the Natives, and worse, a coward, and a traitor.” Mainly for what they saw as his part in agreeing to the treaty negotiations, and yielding Indian lands to the white men.

From Chief Seattle’s own tribe however, comes a different view from Peg Deam, a Cultural Development Specialist at the Suquamish Tribal Council who is quoted as saying Chief Seattle “was put in a position where he had to make some very difficult — and ultimately harmful — choices. Many hearts were broken because their lifestyle was completely changed. The settlers made the Natives move to these little pieces of land, separated from each other. But as a leader and what he could foresee at that time, I think he made the right choice.”

Even with his title of “Chief,” interestingly, Chief Seattle was actually not a chief at all, as there was no hereditary line of Chiefs living among the Puget Sound/Pacific Northwest Indians during his lifetime. Strong leaders took it upon themselves to lead in each of the local villages, and Chief Seattle easily fell into this category characterizing himself by his actions and skills.

Broad and tall (nearly six-feet), Chief Seattle provided his tribe with not only the right blend of leadership skills, but also an ability to understand the intentions of the white settlers, very important qualities during this time in American history. Known as an excellent speaker, he proved his leadership ability and skills as a strong warrior, as a young boy, when he ambushed and defeated several groups of enemies, and attacked a number of area tribes, such as the Chimakum and S’Klallam tribes.

As for his lineage, Chief Seattle’s father was a noble from the Suquamish tribe, located across the Puget Sound from the present-day city of Seattle, which they named after the Chief. His mother was the daughter of a Duwamish chief, and during the era of his birth, the line of descent among the Duwamish Indians traditionally ran through the mother, so he was therefore, considered a member of the Duwamish tribe.

With many of his quotes found in different texts, more specifically, Chief Seattle’s thoughts from “Two versions of the Speech,” written by Duane Bristow, illustrates examples of his wisdom, such as “There is no death, only a change of worlds,” from his 1854 treaty oration. Or, another popular quoted often repeated illustrates how Chief Seattle’s memory lives on long after his death, “Man did not weave the web of life — he is merely a strand in it. Whatever he does to the web, he does to himself.”

At roughly the age of 80, he died in June of 1866, his burial site is located in a cemetery behind the historic St. Peter’s Catholic Church, a religion he converted to before his death, in the hamlet of Suquamish, WA, on the Kitsap Peninsula.