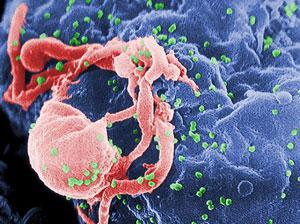 Electron micrograph of HIV-1 (in green).

While most people in the world consider professional athletes, police officers, fire fighters, soldiers, and even the President, as their heroes, David Ho defiantly falls into the category of a hero to millions of people suffering worldwide.

David Ho is a doctor, but he is not just any doctor, he is, quite possibly, the man who could cure HIV/AIDS.

David Ho, born Ho Da-I in Tai Chung, which translates to “big one,” or “great one,” was born on the island of Taiwan on November 3, 1952, and he is the eldest of two sons.

Ho immigrated to the U.S. in 1965, after the complete repeal of the Immigration and Nationality Act of 1965 that banned Chinese immigrants, and was once again united with his father, who came to the U.S. under the Magnuson Act for an advanced education in 1957.

Since his father insisted the family wait to learn English until reaching America, so the family could learn with as little of a Chinese accent as possible, Ho struggled with learning in an unfamiliar language. However, within a few months, Ho began doing well in school and graduated high school with honors. Ho attended MIT and Cal Tech before earning a scholarship to attend Harvard Medical School, and during his residency at UCLA Medical Center, he encountered some of the first cases of AIDS, which would begin his path of dedicating the rest of his medical career to fighting this deadly disease.

Ho, always a man to take a risk, became so good at counting cards at the blackjack tables in Las Vegas, while attending college at Cal Tech, was thrown out of several casinos. His approach to AIDS research is no different. He isn’t afraid to buck the system and think outside the box, and thousands of people are alive today because of it.

His involvement in some of the most critical research to date regarding HIV/AIDS, led to discoveries that time, and again, challenged what doctors thought they knew about the disease. When first discovered, they called the disease Gay Pneumonia, since it affected so many gay men. As the number of gay men dying of what they called “opportunistic infections,” began spiking, many thought it was the result of some bad recreational drugs or some other sexually related illness, but Ho believed it was a new virus. He was right, although according to Mark Ault, a resident at Cedars Sinai Hospital with Ho at the time, “That didn’t stop us from kidding him about how he was always looking for gay men.”

Despite his share of disappointments along the way, in fact, there were many more failures than successes, in the mid 1990’s, he made a breakthrough that even today allows those with HIV to live longer lives.

Ho’s research over the last two decades shows that contrary to initial thoughts, the virus does not just lie dormant upon infecting the body, in fact, the body wages a life and death struggle from the start. It just takes time for the virus to wear the immune system down enough for symptoms to appear after the initial exposure.

Because of this Ho began giving a “drug cocktail” to HIV patients early on during the course of the disease and the results were amazing. Ho began using protease inhibitors combined with the more typical anti-viral drugs and administering them within the first three months of infection. As a result, the HIV levels in the patients’ blood samples dropped so low that it was immeasurable, he did not wait for AIDS to develop, but went on the offensive early, and that is why the disease might be completely eliminated.

While the treatment isn’t perfect and comes with a number of side effects, it is the first big stride that’s been made toward curing HIV/AIDS since it appeared in the early 1980’s, and why Ho was named Time Magazine’s Man ofthe Year in 1996.

In a March 2003 interview with Bill Moyers from Public Broadcasting, Ho says, “I was involved in the HIV epidemic as a young physician, from the very beginning, from the initial identification of these cases. I was there when the mysterious cases emerged. For over a decade, there was very little we could do about these viral infections, how it attacks and destroys the immune system. Every step of the way, this was a terrible disease, and a fascinating scientific challenge. Many of us wanted to help solve this mystery and at the same time solve this epidemic. That’s what sustained us.”

Of HIV/AIDS Ho says, “I think there’s no doubt that the HIV epidemic is the plague of our millennium.” However, with doctors like David Ho, this is one plague, that may soon disappear permanently.

Ho is currently serving as the CEO, Scientific Director, and the Irene Diamond Professor at the Aaron Diamond AIDS Research Center in New York.