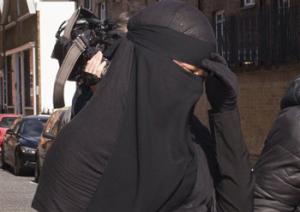 This photo from Monday Sept 16 2013, a Muslim woman, who cannot be named for legal reasons, arrives at Blackfriars Crown Court in London where a judge has ruled that she will be allowed to stand trial while wearing a full-face veil but must remove it while giving evidence. The case has reignited a debate about Muslim veils that has flared across Europe, sparking protests and exacerbating religious tensions in several countries. Photo Credit: The Associated Press, Stefan Rousseau.

In Britain this week, a judge struck a blow against religious oppression. Or for religious freedom. It all depends who you ask.

Judge Peter Murphy ruled that a female Muslim defendant may stand trial wearing a face-covering veil - but must remove it when giving evidence. The case has reignited a debate about Muslim veils that has flared across Europe, sparking protests and exacerbating religious tensions in several countries.

Those tensions exist in Britain, too, and attacks on Muslims and mosques rose after the May slaying of an off-duty British soldier by Islamist extremists. But both the compromise court ruling and the response to it suggest there is little appetite from the center-right coalition government for a ban like that introduced in France.

This is a country where many politicians agree with the aide to former Prime Minister Tony Blair who famously said: "We don't do religion."

"I don't think the government should tell women what they should be wearing," Home Secretary Theresa May, the country's interior minister, said Tuesday. Deputy Prime Minister Nick Clegg agreed: "We shouldn't end up like other countries issuing edicts or laws from Parliament telling people what they should or should not wear."

The veil has become an emotive issue in European countries that are home to visible and growing Muslim populations.

Two years ago France became the first country to ban face-covering veils such as the niqab or burqa anywhere in public. The officially secular nation had already banned Muslim headscarves and other "ostentatious" religious symbols from classrooms.

Belgium has a similar ban, while several other European countries have restrictions in the works. The debate also has erupted in Canada, where the majority French-speaking province of Quebec has proposed banning public servants from wearing showy religious symbols including veils, large Christian crosses and Jewish skullcaps.

The debate exposes the gulf between two differing and sometimes conflicting views - the idea that social cohesion can be imposed by the state, and the idea that freedom of religion is a fundamental right. Many European countries lean toward the former, while the United States feels strongly about the latter. As on so many issues, Britain lies somewhere in the middle.

A 2010 Pew Research poll found majority support for banning veils in several European countries, including Britain. The level of support in Britain was lower than in France or Germany, but higher than in the U.S., where a large majority opposed such a ban.

Britain has no government bans on religious symbols. Schools and employers may set dress rules, but are forbidden from discriminating based on religion. Cases that have come to court - such as that of a British Airways staffer barred from wearing a crucifix at work - have usually concluded in favor of religious expression. 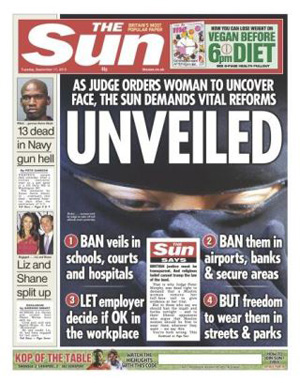 But tensions have arisen over the full-face covering worn by a small minority of women among the United Kingdom's 2.7 million Muslims, and viewed by some Britons as a symbol of female oppression or religious fundamentalism.

This week a college in Birmingham, central England, was criticized by some politicians for overturning a ban on full-face veils after protests. A government minister, Jeremy Browne, called for a national debate on whether the state should step in to prevent young women having the veil imposed on them.

Many Muslim women say that view shows a lack of understanding. "Many people do think we are being forced to wear our scarves. I think that's nonsense, to be honest," said Sadia Rahman, a London art student wearing an elegant bright blue headscarf. "We're all just expressing our personalities in the way we dress."

Monday's ruling by judge Murphy addressed the complexity of the issue. He said the 22-year-old defendant, accused of intimidating a witness, should show her face during testimony because "it is unfair to ask a juror to pass judgment on a person whom she cannot see." But he said she could remain veiled in court the rest of the time.

That did not please everyone. The National Secular Society said the judge should have banned the veil entirely.

But many others, from Muslim groups to tabloid newspapers, fell somewhere in the middle. The populist Sun tabloid, Britain's best-selling newspaper, said the debate was a complex matter of balancing justice and security against "Britain's proud tradition of tolerance that sets us apart from other nations." It called for a ban on full-face veils in schools, courts, hospitals, banks and airports, but not in public streets or parks.

The majority of Muslims, and non-Muslims, agree there are some places where it is necessary to show one's face - for example at border points, in the classroom or in court.

But some Muslims fear the debate is being fueled by anti-Islamic bigotry rather than rational arguments about the role of religion in society.

"Just because a woman is wearing a niqab doesn't mean she is a terrorist," said Surma Begum, a London supermarket worker who wears a headscarf. "But that's what is coming out. This is a multicultural society, and I think banning it is not going to stop any problems."

This article really hit home for me because I believe strongly in the freedom of expression. We as citizens have the right to say and wear whatever we want. It is not pleasing to hear that these rights are taken away from people. A head piece does not make anyone a terrorist....