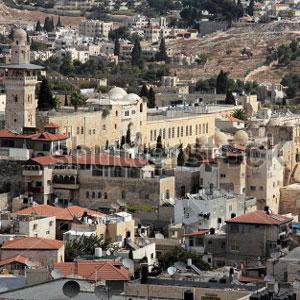 This photo shows the Muslim quarter of the Old City of Jerusalem, which Israel is allowing UNESCO to visit next month, a small victory for those hoping to end the deadlock between Israelis and Palestinians. Photo Credit: shutterstock.com

PARIS (AP) — Israel agreed to allow a mission from UNESCO, the U.N.'s cultural arm, to visit the Old City of Jerusalem next month, a small victory for those hoping to end the deadlock between Israelis and Palestinians.

Israel announced Tuesday that it also agreed to take part in a Paris meeting of experts next month on the Mughrabi Ascent that leads to a disputed holy site in Jerusalem's Old City revered by both Jews and Muslims.

In turn, the Palestinians are to drop, for now, the debate on five resolutions condemning Israel's occupation of the West Bank.

The monitoring mission and meeting aim to safeguard the cultural heritage of the Old City.

Cultural heritage has risen as a flashpoint for the two sides since the Palestinians became a UNESCO member in 2011.