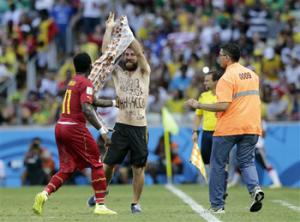 The man who invaded the pitch during the Germany-Ghana match at the World Cup was a neo-Nazi sympathizer, according to a report that will be delivered to FIFA on Monday. Photo Credit: The Associated Press, Matthias Schrader

Racist behavior from fans is showing up at the World Cup games much like it has during games across Europe during the regular season. The man who invaded the pitch during the Germany-Ghana match at the World Cup was a neo-Nazi sympathizer, according to a report that will be delivered to FIFA on Monday.
The fans' anti-discrimination network, Fare, is preparing a report on Saturday's incident, when a shirtless fan interrupted play. Messages written on his chest and back included "HH", signifying Heil Hitler, and "SS," referring to the Nazi paramilitary unit.

"There would be no other explanation for it," Fare executive director Piara Powar told The Associated Press on Sunday. "The question becomes how does one control an individual fan who chooses to mark his body and jumps on the pitch to propagate his neo-Nazi views."

Fare's report will also refer to fans wearing blackface makeup at the match in Fortaleza with no intervention by stadium security, Powar said.

Both incidents are "currently being analyzed by the chairman of the FIFA Disciplinary Committee," the governing body said in a statement. "We cannot comment any further at this stage. We do not respect any discriminatory messages," FIFA spokeswoman Delia Fischer told reporters earlier Sunday. "We are always taking any evidence or submissions to our disciplinary committee."

FIFA will also consider a report by its match commissioner on the day, Eggert Magnusson of Iceland.

The shirtless man ran onto the pitch in the second half of the 2-2 draw, revealing an email address and telephone number with a Poland international code written on both his chest and back.

He was ushered away by Ghana midfielder Sulley Muntari before being detained by stewards. 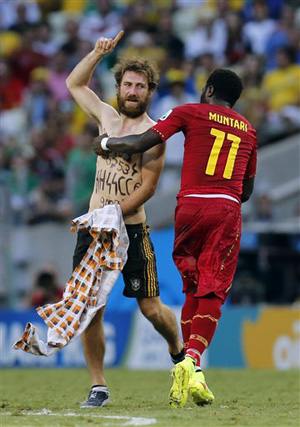 "He came running, charged and jumped over the stewards," Brazil's organizing committee spokesman Saint-Clair Milesi said Sunday. "Such behavior is totally unacceptable. He was taken to the local authorities for the proper measures."

It was unclear Sunday if the man was questioned about his political views, or just for encroaching on the pitch.

Powar questioned the organizers' security operations in and around the stadium for both incidents. "It's a failure in the FIFA system to get as far as he did," said the English official. "Generally in big tournaments of this kind there are security officers. They are scouring the crowd and they can advise stewards and police."

Powar suggested that monitors could have helped intervene with the men, appearing to be Germany fans, who were photographed inside the stadium with blackened faces. FIFA is investigating a possible racial discrimination case after the images circulated on social media networks. "It is inappropriate and to a lot of people it's pretty offensive," Powar said.

FIFA holds national football federations responsible for their fans' behavior inside stadiums. The German football body faces fines and sanctions in both cases. "It will be going in the report to FIFA," Powar said, expressing sympathy for the German fans groups which are active at the World Cup. "Along with England, they are the main country doing fan work in Brazil."

In previous cases at the World Cup, Fare reported sightings to FIFA of far-right banners displayed by Croatia and Russia fans, and alleged anti-gay slurs chanted by Mexico and Brazil fans.

FIFA opened a disciplinary case for improper conduct against the Mexican federation.