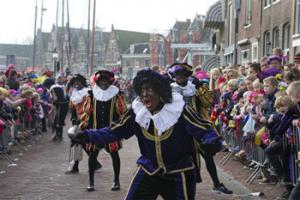 In this Nov. 16, 2013 file photo a "Zwarte Piet" or "Black Pete", jokes with children after arriving with Sinterklaas, or Saint Nicholas, by steamboat in Hoorn, north-western Netherlands. Amsterdam’s mayor and organizers of a large children’s winter festival have unveiled plans on Thursday, Aug. 14, 2014 to reform the image of “Black Pete” in order to remove perceived racist elements over a period of years. Photo Credit: The Associated Press, Peter Dejong, File.

The image of Black Pete image as a helper and sidekick of Santa Claus will change after coming under fire in recent years as being racist. Amsterdam's mayor and the organizers of a large children's winter festival have unveiled plans to overhaul the image of "Black Pete" - the sidekick to the Dutch Santa Claus - after protests that the character exhibited racist elements.

Mayor Eberhard van der Laan said Thursday that Pete's appearance will be changed over several years from his current blackface to make him look like he has been merely covered with soot from going down chimneys to deliver presents.

Black Pete has become the subject of protests in the Netherlands. Opponents say he is a caricature of an African slave carried over from colonial times - he is usually portrayed by white people wearing blackface makeup, bold red lipstick and frizzy Afro wigs.

But a large majority of the Netherlands' mostly white population says that Pete is a positive figure and denies any racial insult.

Last month an Amsterdam court agreed with findings by a Dutch discrimination vetting board and a U.N. advisory panel that Black Pete's look is offensive. 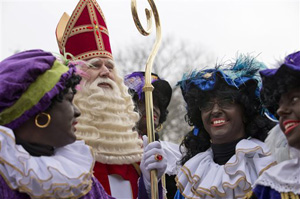 Pam Evenhuis, spokesman for the Amsterdam committee that organizes the arrival of Santa Claus, or "Sinterklaas" in Dutch, says change is necessary to make sure the children's festival is fun and not controversial. Details were still being debated.

In the Dutch tradition, Sinterklaas arrives on a steamboat laden with gifts, accompanied by numerous Black Petes. More than 250,000 people attend the celebration in Amsterdam alone.

Evenhuis said it's not possible to change Pete's appearance drastically in just a year, as his look is engrained in the minds of Dutch adults and children.

Although Amsterdam is influential, other towns, businesses and individuals across the country may not want to change his look, the mayor added.