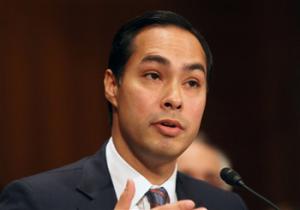 Julian Castro's appointment as head of HUD shows the growing influence of Hispanics in American politics and the political process.

The U.S. Senate easily confirmed San Antonio Mayor Julian Castro on Wednesday to head the Department of Housing and Urban Development, boosting the national profile of a Democrat with a compelling biography who is considered a vice presidential contender in 2016.

The 71-26 vote makes the 39-year-old Castro one of the government's highest-ranking Hispanics, a growing group of voters who lean solidly Democratic. His ascension comes two years after he got his first broad national exposure when President Barack Obama picked him to deliver the keynote address at the 2012 Democratic National Convention.

Castro grew up in a working-class San Antonio neighborhood, the Mexican-American son of a single mother who was a Latino rights activist.

He has a law degree from Harvard University and is a three-term mayor of Texas' second largest city. His options for rising in politics were viewed as limited in a Republican-dominated Texas, where no Democrat has triumphed in a statewide contest in two decades.

Castro's twin brother, Joaquin, is a congressman who represents much of the San Antonio area.