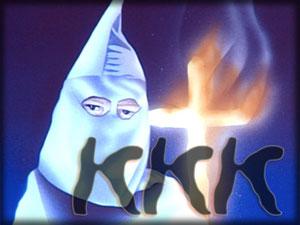 The planned rally in Memphis shows that the Ku Klux Klan is alive and well today. One of the worst vestiges of racism and racial segregation in the south is promoting hate and separateness, still in the 21st Century.

Memphis police have vowed that security will be heavy at the weekend rally, where the white supremacist group plans to protest the renaming of three Confederate parks.

According to the Associated Press, "A North Carolina-based faction of the Klan received a protest permit after the City Council voted to change the names of Nathan Bedford Forrest Park, Jefferson Davis Park and Confederate Park. Forrest was a slave trader, Confederate cavalryman and member of the first version of the Klan."

The council temporarily changed Confederate Park to Memphis Park; Jefferson Davis Park to Mississippi River Park; and Nathan Bedford Forrest Park to Health Sciences Park—all in an effort to be sensitive to the terrible atrocities of the history and practice of racism in the south. A committee has been formed to help the council decide on permanent names for the parks.

According to Toney Armstrong, Memphis Police Director, said Klan members will be fenced off from the anticipated crowd of anti-Klan demonstrators and will be bused to and from the rally site in front of the Shelby County courthouse in downtown Memphis.

Citizens and city officials hope that the protest on Saturday does not turn violent. A family-themed event has been organized by the city, along with tourism development officials, community groups and the chamber of commerce to counter the rally.

In an effort to maximize security, a section of the downtown area will be closed off and loaded with officers. In addition, fencing will be placed in front of businesses as added protection. 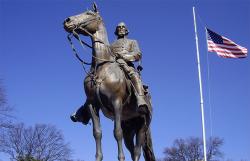 Armstrong has memories of a Klan rally that occurred in 1998 when he served as an undercover officer. According to the Associated Press, Armstrong recalls that the rally "turned ugly when anti-Klan protesters tossed bottles and rocks at police. Windows were broken out in downtown buildings and police cars. Tear gas was used to disperse the crowd. About 20 people were arrested. Armstrong said he learned from mistakes made by the department 15 years ago and his officers will be better prepared."

Members of the Klan will not be allowed to wear their traditional hood or any masks, after the City Council passed an ordinance banning the wearing of masks for the purpose of civil rights intimidation.

As an extra precaution, Armstrong indicates that officers from his department and other nearby jurisdictions are preparing for the presence of members of other Klan chapters, white supremacist groups, and local gangs to gather and participate in the rally.

"We have a lot of potential powder kegs," Armstrong said Thursday. Armstrong, who is black, said he and other unnamed city officials have received threats in the weeks ahead of the rally.

Armstrong, city leaders and community groups are hoping that the rally is a peaceful one.