The 2012 Presidential Election: Where Do The Candidates Stand On Immigration Reform? 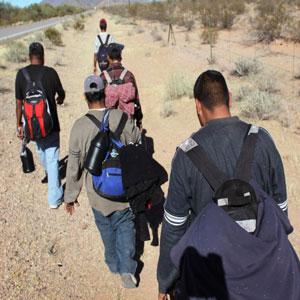 Illegal Mexican immigrants trek through the Sonora Desert in an effort to reach the United States. Photo Credit: wjbc.com

One can hardly watch the news, read a newspaper, or drive down a street where yard work is occurring and not have a fleeting or deep thought about two separate, but very related and important questions: "What should the United States do with the twelve million illegal immigrants already here, working, and having families?" And, "What policies, measures, or actions should be taken to secure the border between Mexico and the United States to stop the influx of people coming into the country illegally?"

One also needs not to go very far (whether around the family dining table, in the break room at work, a pub, or the student union) to realize it is a very emotionally-charged and divisive topic. There are strong, often irrational, opinions about many aspects of the issue. Unfortunately, current or aspiring political leaders at the local, state, and national level espouse many of the divisive and emotionally-charged opinions.

This seems to be the common expectation and the Republican candidates for President who continue to run for the 2012 party nomination express their views at nearly every debate. Unfortunately, the candidates' positions seem to be determined or change based upon the audience to whom they are speaking. On the issue of the best way of stopping Mexicans from crossing our borders illegally, we have heard everything from erecting electrically charged fencing to increasing the presence of the National Guard or some other policing force, or a combination of fencing and "boots on the ground."

As far as the issue of the best way to handle the twelve million illegal immigrants already here and raising families, the proposed solution is non-existent or at best unclear. The closest proposed policy is to issue some form of amnesty — where citizenship would be extended based on past conduct/contributions and some kind of penalty payment structure. But there doesn't seem to be a well-thought-out policy on which candidates and the public can debate and arrive at some reasonable and practical solution.

There are a few things that seem indisputable: 1) It is unrealistic to think that you can round up and send twelve million people back to Mexico; 2) It seems illegal, immoral, and irresponsible to continue to deny the offspring of illegal immigrants, who are born in this country and legal citizens, the rights that go along with that citizenship: The right to get a quality education beyond the secondary level, and the right to get the best job for which they are qualified.

That is what passage of the Dream Act is all about — allowing the children of illegal immigrants born, reared, and educated here to have the same opportunity to go to college and get a better job as other American Children. Legislation similar to the Dream Act has been adopted by 11 states, but continues to fail at the federal level, in the United States Congress.

Given the size and importance of the components of the current immigration issue, do you think it should be a major part of the platform of candidates vying to become President of the United States in 2012?

If you were sending the people who are vying to become your Congressman, your Senator, your President your thoughts about these issues, what solutions would you propose to address the immigrants who already live here? And, what measures do you think should be taken to secure our borders between Mexico and the United States?

"That is what passage of the Dream Act is all about - allowing the children of illegal immigrants born...here"

The Dream Act would provide conditional permanent residency to certain illegal individuals of good moral character who graduate from U.S. high schools, arrived in the United States as minors, and lived in the country continuously for at least five years prior to the bill's enactment. This bill would have included illegal immigrants as old as 35 years of age. (Wikipedia)

ASIA FOR THE ASIANS, AFRICA FOR THE AFRICANS, WHITE COUNTRIES FOR EVERYBODY!

The Netherlands and Belgium are just as crowded as Japan or Taiwan, but nobody says Japan or Taiwan will solve this RACE problem by bringing in millions of third worlders and quote assimilating unquote with them.

Everybody says the final solution to this RACE problem is for EVERY white country and ONLY white countries to “assimilate,” i.e., intermarry, with all those non-whites.

How long would it take anyone to realize I’m not talking about a RACE problem. I am talking about the final solution to the BLACK problem?

And how long would it take any sane black man to notice this and what kind of psycho black man wouldn’t object to this?

But if I tell that obvious truth about the ongoing program of genocide against my race, the white race, Liberals and respectable conservatives agree that I am a naziwhowantstokillsixmillionjews.

They say they are anti-racist. What they are is anti-white.

Anti-racist is a code word for anti-white.