Structural Racism in Detroit to Be Examined 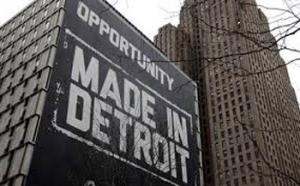 Detroit was once the land of opportunity brought about by a thriving auto industry. Now the city is in economic ruins. Photo Credit: reuter.com

Structural racism in Detroit will be examined in the areas of education, health care, housing and safety among others. The study will be conducted by Wayne Sate University and funded by the W.K. Kellogg Foundation. The goal of the study is to examine the long history of structural or institutional racism that has plagued that city and make recommendations for change.

The Kellogg Foundation is providing a $1.3 million grant to Wayne State University to support the study, which is being launched as the Detroit Equity Lab.

Under this initiative, sixty leaders working in the nonprofit areas of racial equity, health care, education, safety and housing will be recruited to participate in the assessment of the structural racism in these targeted areas and to make meaningful recommendation for meaningful and sustainable change.

There are many cities across the United States that are in need of such focus as the signs of urban decay continues as exemplified by dilapidated housing and blighted neighborhoods, poor performing schools, increases in crime and violence, and the high morbidity rates in most health indicators.

How do you stem these detrimental tides that were caused by and continue to persist because of structural racism in Detroit, and other cities like it? Many this study will shed some light and direction.

Detroit, like many major cities, is more than 80 percent black. Like many major cities, like Chicago, Los Angeles, Philadelphia, Detroit and its mostly white suburbs have had a long history of racial strife borne of structural racism, or institutional racism, where minorities have been consistently and continuously treated differently by government and other institutions.

The Detroit Equity Action Lab will begin this summer and is summer and is funded for three years. The project will be housed at the Damon J. Keith Center for Civil Rights at the Wayne State University Law School.

The partners and participants will work to identify and change long-standing problems as well as create policy recommendations, and take steps to create and achieve broad awareness of solutions for change. The Detroit Equity Action Lab is consistent with the work of the center, which was founded in 2011 to promote education about civil rights and provide resources for research and community outreach.

We eagerly await the outcome of this effort. We applaud The Kellogg Foundation and Wayne State University for tackling a very difficult area as structural and institutional racism.

How wonderful it would be if other of our beleaguered cities followed suit.

For more information and to follow the progress, go to: Wayne State University - Wayne Law