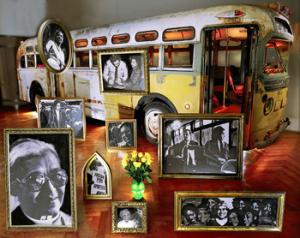 Rosa Parks' belongings, the value of which is estimated to be in the millions of dollars, are now on the auction block waiting to be passed on the highest bidder. Photo Credit: jkylekeener.photoshelter.com

The legacy of Rosa Parks deserves more than being caught up in a legal entanglement in the courts and dust in a New York warehouse.

During the year that we are remembering and commemorating many aspects of the Civil Rights Movement, tangible elements and items of history which would help inform generations of younger Americans about one of the movement's pioneering figures are hidden from view.

To many, Parks' refusal to go to the back of the bus, which set off the historic Montgomery Bus boycott, is the seminal incident that served as the backdrop for Martin Luther King, Jr.'s to give leadership to one of this nation's most defining periods in its history.

Many of Rosa Parks' belongings, the value of which is estimated to be in the millions of dollars, are now on the auction block waiting to be passed on the highest bidder.

It is the fight among heirs and friends of Rosa Parks that has brought us to this shameful and unfortunate place despite the fact that Parks made it clear that she wanted her belongings to be archived and shared with future generations.

What are we to make of this irreverent behavior during a time when the nation is celebrating the 50th Anniversary of the Civil Rights Act and the Voting Rights Act? Plus, we are in the final stages of completing a new Smithsonian museum of African-American history.

What better place that to have all of Parks' artifacts on display for the world to see and learn from as well as the generations that will follow? 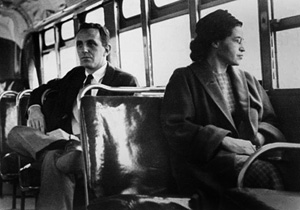 Will the Smithsonian stand up a make a bid to acquire these valuable and historical treasurers, which include her personal papers, photographs, Civil Rights documents, tributes, books, clothing, furniture, her Congressional Gold Medal, her Presidential Medal of Freedom and her own writings – not only for the annals of history but to rescue these misguided heirs and friends from their collective shame?

This shameful circumstance involving Parks' belongings is not unlike that, which has engulfed some of the priceless belongings of Dr. Martin Luther King, Jr. His children are fighting over whether they should be kept or sold. The squabble has resulted in some of King's most cherished artifacts being stored in a safe deposit box under court protection.

Where is the honor, the respect, the appreciation for the contributions both Parks and King made not only to African-Americans but to all humanity? Yet, it seems that the magnitude of those contributions are least appreciated by those closest to them.

Family and friends, haven't you no shame? The least you can do is protect, promote, and perpetuate the legacies that parts of which we all should strive to emulate.

When the Smithsonian Museum of African-American History opens next year, let us lift up a collective prayer that Rosa Parks' belongings will have found a suitable and most fitting resting place.