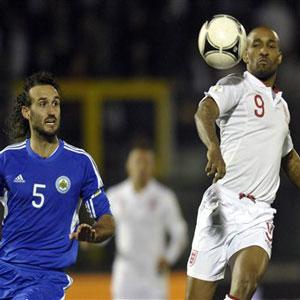 SOFIA, Bulgaria (AP) - UEFA wants players to speak out against their own teammates and fans following a series of racist incidents at football matches.

FIFA President Sepp Blatter also called for stricter penalties, and his governing body must decide on opening disciplinary cases into incidents last Friday at Croatia vs. Serbia, Poland vs. Ukraine, and San Marino vs. England.

After selected to join the England squad last week, Rio Ferdinand declined, and his brother was involved in a high-profile case that led to the suspension of Chelsea captain John Terry, for four matches for racial abuse, and losing the England captaincy.

During that case, the public criticized Chelsea for how its officials and players supported Terry, including providing witness statements in his defense.

On Thursday, UEFA stressed a key role for players to help curb the problem when it ratified a proposal on tackling discrimination presented by its Professional Football Strategy Council, chaired by President Michel Platini.

"We will have some very heavy sanctions against these people and so we are trying to set up laws, rules, and means so that we can address this issue and the national associations can also fight racism," Platini said.

Players and coaches, "namely those with most influence on the perpetrators of racist acts - (should) speak out, even if this may mean criticizing their own fans or players," UEFA said in a statement.

The debate on racism in European football intensified this season after incidents including a bad-tempered match between Serbia and England in an Under-21 European Championship playoff, and stadium closures imposed by FIFA on Hungary and Bulgaria for World Cup qualifiers.

AC Milan midfielder Kevin-Prince Boateng's decision to walk off the pitch, causing the end to a friendly against a fourth-tier Italian club, and led FIFA to appoint him to a task force studying the problem.

The UEFA strategy panel, which included delegates from national associations, leagues, clubs, and players' unions, met on Wednesday in Sofia and urged competition organizers to tell referees "to stop matches in cases of racism."

Still, UEFA's claim of zero tolerance of racism comes after it declined to open disciplinary action against Zenit St. Petersburg after a Europa League match two weeks ago against Basel, where Russian fans reportedly targeted monkey noises at the Swiss club's players.

Basel midfielder Cabral, who is black, suggested the match was too finely poised, as his team defended a 2-1 aggregate lead with 10 men, to follow Boateng's example. 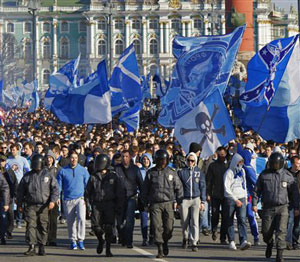 "Of course, the referee should have intervened," Cabral reportedly told the Swiss media. "Maybe if we were going to be eliminated, I would have left the pitch, but there ..."

The UEFA statement on Thursday called on state authorities to "play their part."

"Providing the football bodies with the necessary legal means; acting and emphasizing to arrest, prosecute, and ban from stadia for significant periods those responsible for racist acts; allowing the exchange of information regarding racist activities between states, and football bodies," UEFA said.

The proposal stated UEFA's "full and unconditional opposition to any form of discrimination."

More often than not, it has been found that we tend to go along with our own peers groups in regard to comments made about race. In an effort to reduce the conflict between friends or between team mates we choose not to speak up when something is said that is racially emphasized. I think that it is great UEFA is trying to get the team mates to be less tolerant of the bad-natured racial comments. To often we let things slide and we choose to turn a blind eye to the inappropriate statements made amongst friends and peers. Then we wonder how it has gotten this bad in society. If we all chose to be less accepting of the racial remarks that people make, I truly believe that we would see some dramatic changes in the way racism is approached.