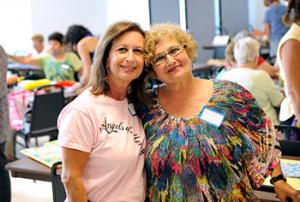 Mary Jo Colligan and her nimble-fingered seamstresses at Angels of Mercy make dresses for young girls everywhere around the world. Photo Credit: catholiccourier.com

Colligan explains how the non-profit began: "Seven years ago, I was at a place in my life where I was seeking help for a loved one. While searching the Internet, I came across the Mercy Ministries website. The name grabbed my heart! The word "mercy" has had great meaning in my life ever since I was a young girl. It seems all our babysitters (I come from a family of six children … of which I am the oldest) were Mercy High students.

She adds, "My nieces and daughters also went to Mercy. It was a household word in our family! Later I became an Associate with the Sisters of Mercy … and so the story begins." 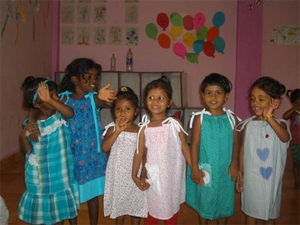 When Colligan heard about "Dress a Girl Around the World Foundation," she and other volunteers took action. Distressed by the statistics regarding sex trafficking, the group committed itself to restoring dignity to impoverished young girls, unable to wear anything but tattered clothes. The work the women do was featured in the Rochester, New York, Democrat & Chronicle.

Two days after the article appeared, as Colligan recalls happily, "150 women were lined up outside St. Cecilia's Church with fabric and sewing machines. Our goal was 100 dresses. That first evening, 550 dresses were sewn. I became the Mercy Ministries representative for all of New York State," she reports," and to date, our small group of volunteers has sent 81,000 dresses to clothe and give hope to young girls all over the world, including those in our own country."

Billy Graham maintained the angels are nearer than you think. By visiting a web site that angels are rumored to visit: angelsofmercyny.org, you can learn how to join this continued mission to stop human trafficking and thus, increase your proximity to angels.