Voices Beyond Bondage Fills Gap in History of Black Poetry 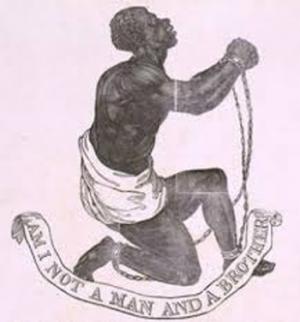 There were black poet during slavery, a time when it was thought that black could not read nor write. Photo Credit: sejarah.kompasiana.com

A new book, "Voices Beyond Bondage: An Anthology of Verse by African Americans of the 19th Century" edited by Erika DeSimone and Fidel Louis, fills a gap in the history of black poetry especially during slavery and following emancipation.

A work of more than a decade, the project came about as Louis was working on his thesis about the black press and noticed that many if not all of the black newspapers of that time included poetry in each issue. Louis began to collect these poems and was joined by DeSimone in 2002 in vetting the thousands of works to ensure they were actually written by African-American poets and choosing which ones to include in this collection.

Editors Erika DeSimone and Fidel Louis combed through thousands of black newspapers and pamphlets like The North Star, Freedom's Journal, Frederick Douglass' Paper, Western Cyclone and The Christian Recorder to find 150 poems written by black slaves and black freedmen and freedwomen to help flesh out what they call a gap in the history of the black literary movement. 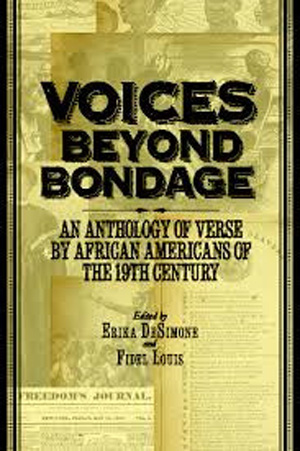 The collection aims to fill in gaps in the commonly accepted history of black poetry.

"Voices Beyond Bondage: An Anthology of Verse by African Americans of the 19th Century" focuses only on poems published in that era's black newspapers - the main literary outlet for black authors and poets of the time - "Voices" covers the gamut of African-American poetry from 1827 to 1899: odes to freedom and condemnation of slavery, celebrations of life and love, calls to religion and politics, and tributes to the gloriousness of everyday life.

The most powerful are the poems about the cruelty and desperation of life in bondage, many written by anonymous slaves or slaves like Horton or Mingo, who pinned his on the walls of his slave prison before dying in an escape attempt. It was reprinted in The Weekly Anglo-African on Aug. 10, 1861. 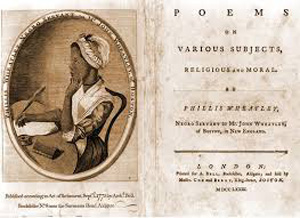 Works by more famous poets like Jupiter Hammon and Phyllis Wheatley - the first published African-American poets - are purposely missing, the editors said. Hammon, a Long Island, New York, slave, is remembered as the first published African-American poet, with his poem "An Evening Thought: Salvation by Christ With Penitential Cries," published in 1761 in the colonies. Wheatley's "Poems on Various Subjects, Religious and Moral" was published in England in 1773 before her emancipation.

But to many, the black literary movement starts with Hammon and Wheatley, then skips all the way to Langston Hughes, Zora Neale Hurston, James Weldon Johnson and the Harlem Renaissance with little to no thought about the poets in the interim, the editors said. But poetry was a common part of the glue of the black community. The black newspaper saw its job not to just inform, educate and entertain, but also to serve as an outlet for black literature that was ignored by the mainstream white press.

Not all of the poets were slaves. John Willis Menard was a newspaper publisher and the first African-American elected to the House of Representatives, although he was never seated despite defending his election victory on the House floor - becoming the first black man to address Congress. (Joseph Rainey in 1870 would become the first black to serve in Congress.) 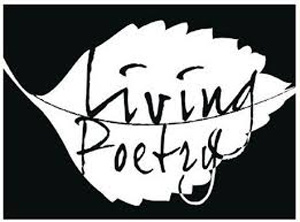 And they didn't all write about slavery. The book's poetry is broken up into five parts: Bondage & Calls to Freedom, Deliverance & Remembrances, Moral & Civic Perspectives, Reminiscence and Humor, and Spirit & the Natural World.

DeSimone and Louis' work expands the field of black poetry, disproves the myth that 19th-century African-Americans were illiterate or uneducated, and should be a welcome addition to any historian or poetry lover's library.