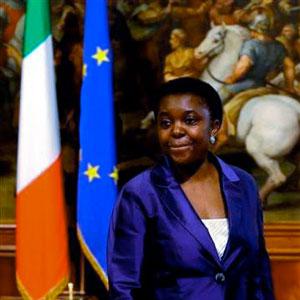 Congolese-born surgeon Cecile Kyenge held a news conference to introduce herself to Italians so they could get to know her. Targeted by racial slurs and taunts since her appointment, Kyenge said Friday that Italians aren't racist but that some are merely ignorant of other cultures and the "richness" that immigration can bring.

"I am not 'colored.' I am black. It's important to say that. I emphasize it proudly," she said.

Kyenge's appointment as integration minister was hailed as a big step for Italy, which only recently had to cope with waves of immigration and the resulting problems of integration into a largely homogeneous society.

But the move prompted racist taunts from xenophobic politicians and members of neo-fascist Internet groups - a reaction so vile the government authorized its anti-discrimination office to investigate. (One European parliamentarian from the anti-immigrant Northern League party called her a member of a "bongo bongo government.")

One of her chief defenders, lower house speaker Laura Boldrini, told La Repubblica in an interview posted on its website Friday that she herself has been the target of death threats, which began after she stated publicly that Italy's laws about inciting racial hatred on the Internet should be tightened.

Boldrini showed the newspaper hundreds of printed pages containing the threats that she said showed "'sexist aggression" against her personally, and women in public office in general, ranging from the innocuous to the violent.

"I am not afraid to open a battle front, if necessary," Boldrini was quoted as saying. "Will we give visibility to a group of fanatics? Yes, it's true. But they are not a few, there are thousands and thousands. They are growing every day and they constitute a part of the country that we cannot ignore."

Kyenge thanked her defenders, but refrained from lashing out at her detractors. She stressed that Italy has a long tradition of welcoming foreigners, a tradition that Italians must appreciate anew, and apply to daily life.

"In reality, Italy isn't a racist country," she told reporters. The problem, she said, is ignorance of the "other."

"We need to knock down these walls: Until you know the other, skepticism grows, discrimination grows," she said. "At this point, what is identified as racism has at its base not knowing other cultures because in reality, and immigration a richness. Diversity is a resource."

Kyenge, 48, was born in Congo and moved to Italy three decades ago to study medicine. An eye surgeon, she lives in Modena with her Italian husband, and two children. She was active in local center-left politics before winning a seat in the lower Chamber of Deputies in the February elections, and Premier Enrico Letta brought her into his coalition government last week.

"We hope she will start a new era for Italy, let's hope!" said Kaius Ikejezie, a Nigerian shopping at Rome's Piazza Vittorio market on Friday.

Kyenge said her priority is to work to make it easier for children born in Italy to immigrant parents to obtain Italian citizenship. Currently, such children can only apply when they are 18. 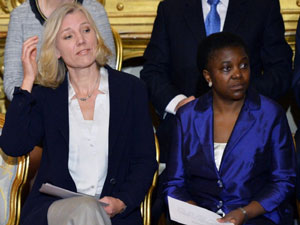 "We have people who are born and raised in Italy who don't have an identity," she said. "They don't feel Italian and they don't feel that they belong to their parents' homeland. We need to start from here."

She offered her own experience as an example of the discrimination that confronts non-Italians living here legally and able to contribute to society: Despite having finished at the top of her class in medical school, Kyenge said she couldn't get work in an Italian hospital for two years because she wasn't a citizen.

"I have always fought against any form of discrimination and racism," she said. But she is realistic too of the limitations of her office, the requirements for a "cultural change," and the precariousness of a government made up of longtime political rivals.

"It could be that today I leave the ministry unable to get any results," she said. "But I have to be able to put in place a basis for all those changes that are so longed-for, for all those dreams."

Unlike France, which has had two or more generations of immigrants and several ministers of African origin, Italy is a relative newcomer to immigration. Foreigners made up about 2 percent of Italy's population in 1990; currently the figure stands at 7.5 percent, according to official statistics bureau Istat.