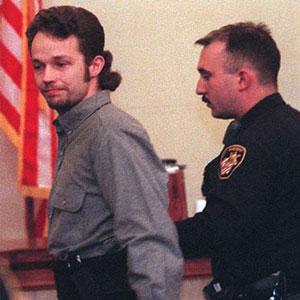 A white separatist killer loses an appeal in his murder conviction of three people, including an 8-year-old child. Chevie Kehoe was also convicted of racketeering and a plot to overthrow the federal government to create a whites-only union. Photo Credit: murderpedia.org

Chevie Kehoe, a white separatist killer loses an appeal on the life sentence he is serving for the murders of an Arkansas family. He once wrote a letter to his hometown newspaper boasting, “he is not afraid to die for his beliefs,” yet, he frantically sought this new trial.

In an even more ironic twist, Kehoe’s grounds for appeal stemmed from a plot he hatched with his attorney to have as many black people as possible serve as jurors during his original trial because they were less likely to impose the death penalty or believe government testimony. Ultimately, nine blacks served as part of the pool of jurors.

Nearly six-months after they mysteriously disappeared, police recovered the bodies of William Mueller, his wife Nancy, and her 8-year-old daughter, Sarah Powell, near the Illinois Bayou just north of town. Kehoe wrapped all of their heads wrapped in plastic bags and handcuffed both adults.

At the time of his arrest, prosecutors said Kehoe was plotting to set up a whites-only nation in the Pacific Northwest and apparently targeted the victimized family because William Mueller was a licensed gun dealer whom Kehoe theorized had access to enough weapons and ammunition to build an arsenal.

On Monday, the 8th U.S. Circuit Court of Appeals in St. Louis, denied Kehoe’s appeal and his argument of his attorney’s flawed strategy to have a majority of black jurors. The three-judge panel noted that during the trial Kehoe’s defense counsel used as many as 30 peremptory challenges to strike down potential white jurors.

Lawmakers also noted Kehoe’s extensive ties to the Aryan Nations white supremacist group and suspected that he and accomplice Danny Lee engaged in a number of other illegal activities, including the bombing of the Spokane City Hall in Washington State. Shown in a videotape that aired to a nationwide audience, the duo also sparked a shootout with Ohio police.

Lee also appealed his conviction and sentence. At the time of their 1999 sentencing, the two were also convicted of racketeering and conspiracy, with the latter charge stemming from their plot to overthrow the federal government and set up a whites-only union.