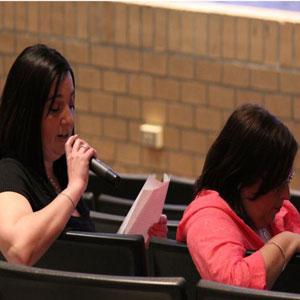 GRAND HAVEN, Mich. (AP) - Some West Michigan residents want a school district to adopt a clearer policy against harassment following complaints about racial intimidation at a high school that started last year and led to suspensions or expulsions.

Local and federal investigations are ongoing, the Grand Haven Tribune reported. According to a response to the newspaper's Freedom of Information Act request, the federal Office of Civil Rights has asked for video surveillance and communication from the 2011-12 and 2012-13 school years.

Two Grand Haven High School students reported that they were harassed while on a school bus in February. There also have been complaints that some students used racial slurs and donned apparel similar to that worn by Ku Klux Klan members.

About 30 people attended a community meeting at the school on Tuesday organized by the Lakeshore Alliance for Ethnic Diversity, The Muskegon Chronicle reported. School officials said the incidents were concerning and unacceptable.

"What a filthy atrocity," said Vicki Lynn Nelson, who was among those at the event. "Why has this gone on for months? Why is this auditorium so empty? I don't understand. I'm so horrified at what has happened. I don't pay tax dollars to let this go on for five months."

The high school notified parents in February about incidents at the school following media coverage, and some say parents should have been told sooner.

Grand Haven Area Public Schools Superintendent Keith Konarska said the incidents were "embarrassing" for the school and the community. At the event, Konarska repeatedly thanked community members for their comments and input, even when they were critical of the administration.

Six students received discipline ranging from short-term suspension to expulsion, he said. A criminal investigation has also been launched into the reported bus harassment. Grand Haven is located along Lake Michigan, about 30 miles northwest of Grand Rapids.

Sadly I do not think that the harassment will ever come to a complete stop. Schools as well as the Board of Education can enforce harsh consequences but there will always be that percentage of children that won't stop until they get their point across. All the schools can do is step in when it's necessary and take that next step by holding community meetings. The parents and the community need to come forward and discuss their options and make sure that they're playing an active role as well. People can not leave all the responsibility in the hands of the school because they're only responsible for the children half of the time. They can not control what happens at home. A school can let the children know it is not acceptable and if they witness the bullying and the racial remarks than they can take the proper precautions but that is really all the options that are available to them. I feel that they should also make new teachers aware of some of the acts that have taken place, just so they know what they might come across. Teachers have to be aware of their surroundings and the situations. My question still remains, what if parents are teaching their children to be racist?. What if they want their children to be this way?. One must consider all these things when looking at why the harassment continues.Personally I think that if a child is willing to bully someone else, especially because of their race that there will be no stopping them from taking even more drastic measures. If a student can not cooperate than I would leave it in the hands of the parents. Make them aware that their child is being taken out of the school because they cannot get along with the other children. It is not worth putting kids at risk. I would have those children placed into private home teaching. This way, they're secluded and away from the other children. It is a distraction to the other kids and it is not fair to put them at risk when school is supposed to be a safe place.A child should not dread going to school. It is hard enough to keep kids from dropping out of high school, it makes it more difficult for them to go when there is a good chance they will be harassed or bullied. Kids need to feel that sense of security and protection. The school should put in an equal effort to make the children realize that their safety is important to them. To make all the parents aware of the occurances, I would call each individual family and leave them a message that it will not be tolerated. This will insure that they can not make excuses when it comes to them not showing up at the community meetings. Force the families to get more involved.