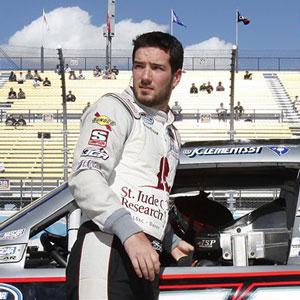 NASCAR reinstated driver Jeremy Clements this week after suspended him for making a racial slur during an interview. In this Nov. 10, 2012 file photo, Jeremy Clements stands next to his car after qualifying for the NASCAR Nationwide Series auto race at Phoenix International Raceway. NASCAR set stipulations that Clements completed, and he is eligible to race this weekend at Bristol Motor Speedway, but is on probation until Sept. 13. Photo Credit: AP/Paul Connors

BRISTOL, Tenn. (AP) - NASCAR driver Jeremy Clements was back at the track Friday after a two-week suspension for using a racial slur, hopeful his lapse in judgment hasn't caused irreparable harm to his career.

"I think everybody deserves a second chance," he said. "I think you've got to look at the person's history. I have never been in trouble with NASCAR. I always try to do the right thing and just want to stay here and be able to race. I always try to get new fans coming and do anything NASCAR wants. I hope it doesn't hurt. I don't know."

Clements made the remark to a blogger for MTV News during an interview at Daytona while helping the reporter locate another driver he was looking for. NASCAR learned of the comment from a witness and suspended Clements indefinitely.

He was reinstated this week after seeing sports diversity expert Dr. Richard Lapchick and the staff at the Institute for Diversity and Ethics in Sports at the University of Central Florida. Although a sponsor offered to pay for the course, Clements said he paid the $2,500 out of his own pocket.

The 28-year-old Nationwide Series driver blamed his actions on making a stupid remark in describing drivers who race too aggressive, and opened his remarks at Bristol Motor Speedway by reading a lengthy apology handwritten on a piece of white loose-leaf paper.

"I want to start out by saying I made a remark that has no place in our society, kidding or not," he began, explaining the entire incident has been particularly embarrassing because his grandfather, Crawford Clements, was crew chief for black driver Wendell Scott in 1965.

"I was raised to respect everybody," he said. 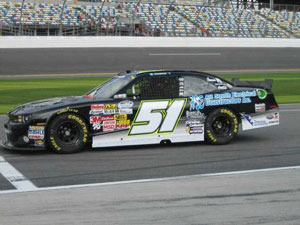 Clements was a little-known driver from Spartanburg, S.C., driving for his family-owned team before the suspension. He finished 15th in the Nationwide Series standings in 2011, and was 14th last year.

Clements was 33rd in the season-opening race at Daytona before he was suspended. He said he's lost only one sponsor because of the incident, and was at Bristol on Friday with St. Jude's Hospital in his firesuit. He said he's learned a lot about himself during his two weeks away from the race track, and from his course with Lapchick.

"You sit out here and talk to people all the time and make jokes and somebody could say something offensive and you might not say something," Clements said. "But from now on, I'm going to stand up and say, 'Man, that ain't something you should say' and try to pass along what I learned."