NYPD Surveillance Of Muslims In Violation 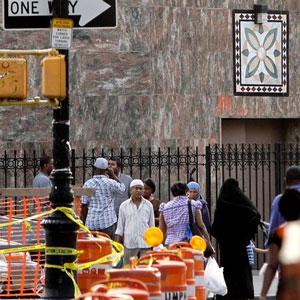 In this Aug. 18, 2011 photo, people walk below a New York Police Department security camera, upper left, which was placed next to a mosque on Fulton Street in the Brooklyn neighborhood of Bedford-Stuyvesant in New York. Civil Rights lawyers told a judge that the NYPD’s surveillance of Muslim communities violates federal guidelines established to stop them from conducting political surveillance. Photo Credit: AP/Bebeto Matthews

NEW YORK (AP) - Civil rights lawyers urged a judge Monday to stop the New York Police Department (NYPD) from routinely observing Muslims in restaurants, bookstores, and mosques, saying the practice violates a landmark 1985 court settlement that restricted the kind of surveillance used against war protesters in the 1960s and '70s.

The city responded by saying it follows the law, but some legal experts say it might be time to look more closely at police practices as the Sept. 11 attacks fade into history.

"This filing is coming at the same time that I think Americans in general are beginning to see their way past the 9/11 era and the fears that engendered," said Karen Greenberg, director of the Center on National Security at Fordham Law School.

The court papers in U.S. District Court in Manhattan seek a court order against additional surveillance of Muslims without evidence of crimes and a new court-appointed auditor to oversee police activities that were "flagrant and persistent."

The civil rights lawyers complained that the NYPD has monitored public places where Muslims eat, shop, and worship and has kept records and notes about their observations despite any evidence of unlawful or terror-related activities. The NYPD's actions violate rules, known as the Handschu guidelines that a court imposed in the 1985 settlement, the lawyers said.

NYPD spokesman Paul Browne said in a statement: "The NYPD adheres to the Constitution in all it does, and specifically the Handschu guidelines in the deployment of undercover officers to help thwart plots against New York City and to identify individuals engaged in support of terrorism." The statement made no reference to informants, which the department has also used.

Browne added that terrorists have tried to attack New York City since the destruction of the World Trade Center, including plots to destroy the Brooklyn Bridge, to blow up the Federal Reserve Bank, and to kill American soldiers returning home to New York.

City lawyer Celeste Koeleveld said the police department "considers the Handschu requirements carefully to ensure that all of its law enforcement actions conform to them."

The civil rights lawyers said there was "substantial evidence" that the police department had for years been using intrusive methods to conduct investigations into organizations and individuals associated with Islam and the Muslim community in New York even though there were no signs of unlawful activity.

NYPD Commissioner Raymond Kelly has said the department has plenty of oversight, including five district attorneys, a committee that investigates police corruption, the NYPD's own internal affairs office, and the court-imposed Handschu guidelines. 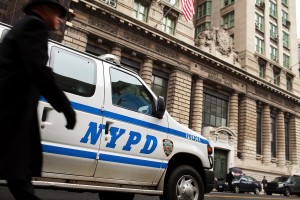 In a speech last year to Fordham Law School alumni, posted on the NYPD website, Kelly offered a spirited defense of its surveillance tactics, quoting the Handschu guidelines as saying that in pursuit of intelligence gathering: "The NYPD is authorized to visit any place and attend any event that is open to the public" and "to access online sites and forums on the same terms ... as members of the public."

He added: "Anyone who intimates that it is unlawful for the police department to search online, visit public places, or map neighborhoods, has either not read, misunderstood, or intentionally obfuscated the meaning of the Handschu guidelines."

The NYPD is the largest police department in the nation, and Bloomberg has held up its counterterrorism tactics as a national model.

The spying was the subject of a series of stories by The Associated Press that revealed the NYPD intelligence division infiltrated dozens of mosques and Muslim student groups and investigated hundreds. The civil rights lawyers' new court motion refers repeatedly to the AP's reporting and includes some internal NYPD documents the AP had obtained and published.

The motion focuses on a particular section of the NYPD's intelligence division known initially as the Demographics Unit and later renamed the Zone Assessment Unit. This unit is at the heart of the NYPD's spying program, built with help from the CIA. It assembled databases on where Muslims lived, shopped, worked, and prayed. Police infiltrated Muslim student groups, put informants in mosques, monitored sermons, and catalogued every Muslim in New York who adopted new, Americanized surnames.

Supporters said the Demographics Unit was central to keeping the city safe, though a senior NYPD official testified last year that the unit never generated any leads or triggered a terrorism investigation.

Matthew C. Waxman, a professor at Columbia Law School who specializes in national security law and has spoken of the role of local police in anti-terrorism efforts, called counterterrorism "inherently and inevitably somewhat of a local police concern" because it's a threat to local security and because local police often have the relationships needed to uncover possible plots.

"On the other hand, aggressive police surveillance or even just perceived surveillance can alienate local communities and cause to dry up the very sources of information so critical to countering terrorism," he said.

Civil rights attorney Ron Kuby, who has represented several Muslims in connection with terrorism cases, said Kelly's calculus is probably shared by most New Yorkers: "If I over-police, I tread on civil liberties, and people complain and file lawsuits. If I under-police, there's a smoking crater in Manhattan and thousands are dead. Gee, what should I do?" 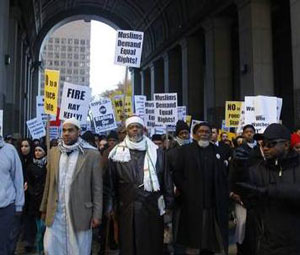 He praised the civil rights lawyers for bringing the Handschu action, saying it was time to restore some of the "damage to the Constitutional fabric of America" after the Sept. 11 attacks.

But he added a little praise for Kelly, too: "I share the general feeling of the citizenry of saying he does a good job of making sure we haven't been blown up on our way to work."

The Handschu guidelines came out of a lawsuit the civil rights lawyers filed and a subsequent 1985 court settlement that set strict time limits for investigations, imposed rules on the kinds of records police could keep, and created a three-person body to oversee such investigations.

Handschu was a reference to lead plaintiff Barbara Handschu in a case that included 1960s radical activist Abbie Hoffman among its plaintiffs.

It was not immediately clear when the judge will rule on the new motion.

I don't like how the article says, "as the Sept 11 attacks fade into history." That will never happen and the author suggesting that as a justification to end survellance is offensive. However, I think the average muslim should not be subjected to this. The Patriot Act is old and outdated, it needs to be changed. If someone has something to hide and their is credible intelligence they have somekind of connection to terrorists, (race doesn't matter) then they should be watched. NYPD is using racial profiling here to the extreme. Racial profiling is an affect police tool, yes, but when abused it turns into out-right racism.