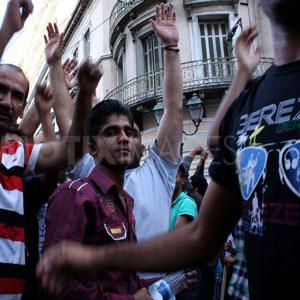 Race relations around the world: Since January 2012, an upsurge in racist attacks against immigrants in Athens, Greece sparks protests. Photo Credit: demotix.com

ATHENS, Greece (AP) - Police in Athens are holding two Greek men as suspects in the fatal stabbing of a Pakistani immigrant worker near the city center on Thursday, and are investigating whether the attack was racially motivated.

A police statement said the 26-year-old Pakistani man was attacked on his bicycle by two men on a motorbike before dawn in the Petralona district of Athens.

The two suspects, both in their twenties, were arrested shortly afterward in the city center, and police said they were carrying switchblades.

Police say the motive of the killing was not immediately clear.

Greece, in the midst of its worst financial crisis in decades, is the main entry point to the European Union for thousands of illegal immigrants, most of whom end up stranded in dire conditions.

Immigrants from Asia and Africa have repeatedly been targeted in violent night-time attacks by thugs, amid a surge in anti-immigration rhetoric that has brought a fringe ultra-right party to Parliament. Its political opponents, including all three parties in Greece's governing coalition, have accused the Golden Dawn party of having a neo-Nazi agenda and inciting and participating in racially-motivated violence - charges the party denies.

The main opposition Radical Left Coalition party blamed the fatal stabbing on right-wing extremists. "The savage racist murder of an immigrant by far-right criminals once again brings to the public attention, in a tragic way, the issue of crude racist violence," a party statement said. It claimed that "fascist criminal gangs are patrolling the streets of Athens unhindered, murdering unprotected people."

Anti-racism activist Petros Constantinou said what he called a "neo-Nazi" killing fitted a pattern of racist violence. "There have been many attacks after nightfall, involving people on motorcycles who target immigrants who are either on foot, on bicycles or on scooters," he said.

Human rights groups have recorded more than 70 racist attacks in Athens between January and September 2012. Most were carried out after dark in public areas and involved more than one aggressor.

Amnesty International said in a statement that Thursday's killing "is a result of the Greek authorities' failure to take decisive action against racially-motivated violence." An official with the organization, Marek Marczynski, said there has been a "dramatic escalation" of racially-motivated attacks in Greece over the past year.

In a report last month, Francois Crepeau, the U.N. Special Rapporteur on the human rights of migrants, voiced deep concern at the "widespread xenophobic violence and attacks" against migrants in Greece. Crepeau accused law enforcement agencies of responding inadequately and said many attacks go unreported as illegal immigrants fear they will be detained and deported if they contact the police.

Anti-racism groups planned to hold a march to the spot of the killing later Thursday. A major anti-racist protest has been planned for central Athens on Saturday.