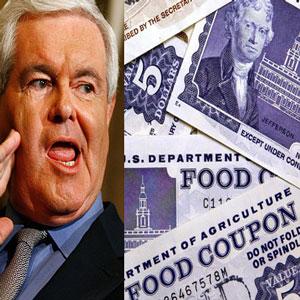 In January, CBS and several other news organizations reported that “Gingrich said that if invited to speak to the NAACP, he would tell the civil rights group “why the African-American community should demand paychecks and not be satisfied with food stamps.” The next day Gingrich claimed that the media had distorted what he said. Information/Photo Credit: mocradio.com

Why is being a social and fiscal conservative synonymous with being a racist and a bigot?

Archie Bunker was the archetype. He was the easily recognizable fiscally conservative blue-collar worker with a limited education and unlimited racist views. In the arena of sitcoms, this stereotype played for laughs. But in real life, it’s no laughing matter.

Even a recent study from Brock University in Ontario found links between racism and social conservatism to low IQ levels. According to his research on childhood intelligence, Brock University professor, Gordon Hodson, claims that a child’s mental ability can be a predictor of political leanings and prejudices in adulthood. However, he adds, it’s not the level of education that’s a factor but a person’s base intelligence.

But Mark D. Naison, professor of African American Studies and History at Fordham University, makes a distinction between principled fiscal conservatives and persons who use racially charged appeals to support their arguments.

He says certain terms have the ability to touch a chord with racially insecure or angry whites and some fiscal conservatives studiously avoid using them. “That (Rick) Santorum and (Newt) Gingrich have not strikes me as truly cynical and reprehensible,” Naison says. “They knew exactly what they were doing.”

His comment is in reference to recent remarks by former senator Santorum professing, “I don’t want to make black people’s lives better by giving them somebody else’s money,” and former House Speaker Gingrich saying that blacks are “satisfied with food stamps.”