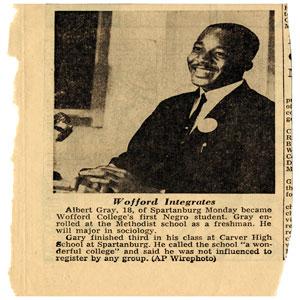 SPARTANBURG, S.C. (AP) - In 1964, Wofford College was the first private school in South Carolina to accept a black student.

The 1960s was a tumultuous time across the nation and in Spartanburg. Al Gray, a Spartanburg native, was the first black student accepted to Wofford. His first night on campus, he was jumped by white students. When they hit him, he hit back.

Wofford College recently reflected on its path to integration with a panel discussion dubbed "Desegregation Decade."

In 1960, a group of about 200 Wofford students burned a cross in front of the school and demanded two of their fellow students be barred from campus because of pro-civil rights activities.

"I was there," Vandiver, then a freshman, said Tuesday.

The two boys who went to the civil rights demonstration in Orangeburg were arrested, and to Vandiver's knowledge, never returned to campus.

Vandiver was from Anderson. Racism was so rampant in the Upstate at the time, Vandiver's father locked him out of the house upon hearing his son shared a hotel room with a black man at a religious conference.

"When I got home, for the first time in my life, the door was locked. I knocked and knocked. Eventually my father came to the door and he opened it up just a crack and said, 'Anyone who slept in the same room with a (black person) doesn't live here anymore," Vandiver remembered.

When it became clear desegregation was coming, Wofford's board still had to mull whether they would fight the requirement or adapt and move on.

"Until we get that behind us, we're not going to be able to get anything else done," Lesesne said he remembered a Wofford trustee telling him.

Even after the decision to desegregate was made, Wofford faced another hurdle, as letters poured in from Methodist churches stating they would no longer support the school financially. Wofford thrived on the patronage of the United Methodist Church. Lesesne said it was Roger Milliken who came to the rescue by establishing a secret, $1 million fund, dubbed the "gift stabilization fund."

Lesesne said he had his first confrontation with rampant racism in his first job in Conway. Prior to that, he said he was sheltered by his small town and then a collegiate atmosphere.

"I never told Al Gray this, but he was probably the reason I came to Wofford," he said.

Gray and Jones told stories of alienation at Wofford. They would flee the campus on weekends to find companionship and the strength to forge ahead.

Gray didn't choose to go to Wofford, his family chose for him. His first few days, Gray said an FBI agent followed him around campus. He was in scuffles, but he says now he's put all that behind him.

"I've been in lots of situations where I was the only. And I got to the point that I could just block it out. When I came here, a lot of things that bother other people didn't bother me . Realistically, Wofford College was a piece of cake to desegregate compared to other places I saw," he said.

Gray's education was interrupted when he went to Vietnam, but his 'place' was filled by Jones, who tells a slightly different story.

"We had a system of apartheid in Spartanburg, S.C., just as bad as any in South Africa," Jones said. " When I graduated from high school a lot of my classmates were of the mind they were going to get the hell out of South Carolina. I made the conscious decision I was going to stay in Spartanburg and make a place for me and my family. I went to Wofford and then University of South Carolina because they had a reputation. I figured if I had degrees from two of the best institutions in the state, no one could deny me a job."

Jones graduated from Wofford in 1969 as the school's first black graduate, but he was bitter toward his alma mater. Sometimes, he said, he would avoid Church Street just to keep from seeing the campus. His attitude changed when a friend badgered him into attending the college's first black student alumni reception.

"We had doctors and lawyers and pilots and very professional people and that was when I started to realize what I went through was worth it," he said.

Gray returned to Wofford after his service and received his degree in 1971 and went on to serve 12 years on the college's board of trustees.

Reading this story uplifted my heart for some apparent reason. It’s a story of triumphant and courage to beat the odds of injustice. To know that Al Gray was jumped and beat up by fellow college students and fought back is quite interesting. I am grateful to have the opportunity to attend college, park my car in the same parking lot like every one else, walk into the same entrance like every one else and sit in any seat that I want. The many sacrifices people such as Al Gray had to withstand made it possible for me as an African-American male to achieve.