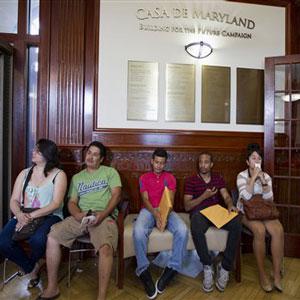 This Aug. 15, 2012 photo shows applicants waiting in Casa de Maryland in Langley Park, Md., before they can apply for the Deferred Action Childhood Arrivals, as the U.S. started accepting applications to avoid deportation and get a work permit, but not a path to citizenship. The Associated Press-GfK poll, as Republicans seek to increase their meager support among Latino voters, who turned out in large numbers to help-re-elect President Barack Obama in November. Photo Credit: AP/Jose Luis Magana

WASHINGTON (AP) - More than 6 in 10 Americans now favor allowing illegal immigrants to eventually become U.S. citizens, a major increase in support driven by a turnaround in Republicans' opinions after the 2012 elections.

The finding, in a new Associated Press-GfK poll, comes as the Republican Party seeks to increase its meager support among Latino voters, who turned out in large numbers to help-re-elect President Barack Obama in November.

Emboldened by the overwhelming Hispanic backing and by shifting attitudes on immigration, Obama has made overhauling laws about who can legally live in the U.S. a centerpiece of his second-term agenda. In the coming weeks, he is expected to aggressively push for ways to create an eventual pathway to citizenship for the estimated 11 million illegal immigrants already in this country.

The poll results suggest that the public overall, not just Hispanics, will back his efforts. Sixty-two percent of Americans now favor providing a way for illegal immigrants in the U.S. to become citizens, an increase from just 50 percent in the summer of 2010, the last time the AP polled on the question.

In an even earlier poll, in 2009, some 47 percent supported a pathway to citizenship for illegal immigrants.

Further boosting the president on the issue, Democrats have opened a 41 percent to 34 percent advantage as the party more trusted to handle immigration, the first time they have held a significant edge on the matter in AP-GfK polling. In October 2010, Republicans held a slight edge over Democrats, 46 percent to 41 percent, on the question of who was more trusted on immigration.

Much of the increase in support for a path to eventual citizenship has come among Republicans. A majority in the Republican party - 53 percent - now favor the change. That is up a striking 22 percentage points from 2010. Seventy-two percent of Democrats and 55 percent of independents like the idea, similar to 2010.

The findings suggest that those Republican lawmakers weighing support for eventual legal status for illegal immigrants could be rewarded politically not just by Democrats and independents but also by some in their own party as well.

This comes amid soul-searching in the party about how the Republicans can broaden their support with Latinos, who backed Obama over Republican presidential nominee Mitt Romney, 71 percent to 27 percent, in November. Romney received less support from Latinos than Republican President George W. Bush did. But his slice was on par with candidates Bob Dole in 1996 and George H.W. Bush in 1992.

Some Republicans have concluded that backing comprehensive immigration reform with a pathway to citizenship is becoming a political necessity. Many lawmakers remain strongly opposed, and it's far from clear whether Congress will ultimately sign off on such an approach. But in the Senate, a bipartisan group of lawmakers is working to draft immigration legislation, and Sen. Marco Rubio, a Republican and a possible 2016 presidential candidate, has offered proposals that would ultimately allow illegal immigrants to attain legal status.

One poll participant, Nick Nanos, 66, said that providing a way for illegal immigrants to become citizens would respect America's history as a nation built by immigrants.

Overall, 54 percent in the poll said immigration is an important issue to them personally, a figure that's remained steady over the past couple of years. 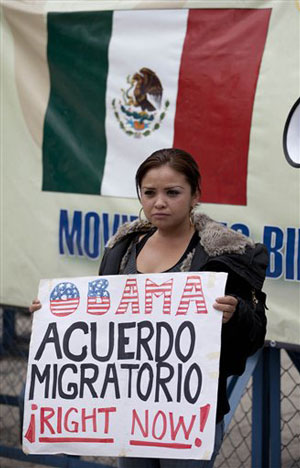 Republicans aren't the only group whose views have shifted significantly. In August of 2010, just 39 percent of seniors favored a path to citizenship. Now, 55 percent do. Among those without a college degree, support has increased from 45 percent to 57 percent.

And 59 percent of whites now favor a way for illegal immigrants to gain citizenship, up from 44 percent in August 2010, and 41 percent in September 2009.

Overall, the poll found 35 percent strongly favored allowing illegal immigrants to become citizens over time, while 27 percent favored the idea somewhat. Just 35 percent of Americans opposed the approach, with 23 percent strongly opposed and 12 percent somewhat opposed. That compared with 48 percent opposed in 2010 and 50 percent in 2009.

The Associated Press-GfK Poll was conducted Jan. 10-14, 2013, by GfK Roper Public Affairs and Corporate Communications. It involved landline and cell phone interviews with 1,004 adults nationwide. Results for the full sample have a margin of sampling error of plus or minus 4 percentage points; the margin is larger for subgroups.