Clara Maass: The Woman Who Saved Millions From Yellow Fever 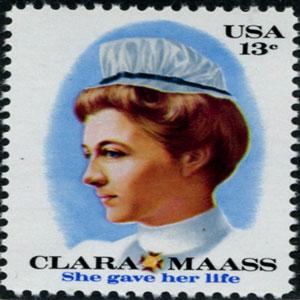 With influenza flooding the news recently, it seems timely to recall another deadly disease and the woman who helped defeat it but gave her life in the attempt.

When it struck a port city, the highly contagious, yellow fever, known as "Yellow Jack," a yellow quarantine flag was flown alerting incoming ships to avoid the area at all costs. The Spanish called it el vomito negro (the black vomit), referring to the dark vomit colored by blood flowing from the stomach wall. The basic symptoms included headaches, backaches, chills, nausea, high fever, and how a person's skin turned pale yellow due to jaundice resulting from disturbed bile and liver functions.

Between 1668 and 1893, 135 major yellow fever epidemics struck American port cities. There was no cure. When yellow fever hit, you locked your door and prayed. By the late 1890s, a theory emerged that mosquitoes might carry yellow fever, but it was only a theory.

In 1899, Mass volunteered to nurse American soldiers in Manila in the Philippines, and when Maass arrived, the city was in the midst of a massive yellow fever epidemic. Daily, she saw widespread suffering and horrible death. She returned home in 1900.

That same year, several physicians met in Cuba determined to find the cause of yellow fever. By August, they targeted the Aedes Aegypti mosquito as a likely carrier of the disease, which meant proving their hypothesis – with human volunteers.

Meanwhile, Havana was in the grip of yet another widespread yellow fever epidemic. An urgent call came for nurses to help Havana’s sick, Maass answered that call, and learned about the yellow fever research underway. Desperate for test subjects, the United States Army offered $100 to anyone who volunteered to be bitten by a mosquito suspected of carrying yellow fever. Maass volunteered in June 1901 - the only woman to do so.

Why did she volunteer? No one knows.

On June 24, 1901, the brave nurse bared her arm to a mosquito suspected of carrying yellow fever. Although she caught the illness, it was a mild case, and she quickly recovered. On August 14, Maass submitted to the test again, but this time, she contracted a severe case of yellow fever and was in extraordinary agony. On August 24 she died.

The death of Clara Maass ended the yellow fever experiments, but firmly established the Aedes Aegypti mosquito as the disease carrier. A systematic extermination of the insect began, and within a few months not a single case of yellow fever was reported in Havana.

Maass's death was front-page news in the United States because her sacrifice meant that millions could now be saved from death.

Today, in a time when the shallowest of people are considered role models, it’s fitting to recall a true hero.