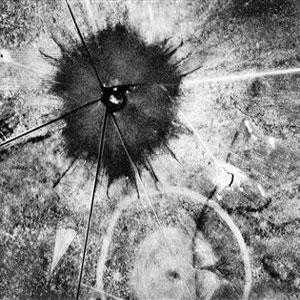 This July 16, 1945 file photo shows an aerial view of the aftermath of the first atomic explosion at Trinity Test Site, N.M. It left a half-mile wide crater, ten feet deep at the vent and the sand within the crater had been burned and boiled into a highly radioactive, jade-green, glassy crust. The “Voices of the Manhattan Project” website is the first step in what organizers say will create a central repository for the oral histories surrounding the once mysterious World War II-era project. (AP)

ALBUQUERQUE, N.M. (AP) - From living in a top-secret city on a mesa in northern New Mexico to smuggling a suitcase packed with alcohol into a dry federal research lab in Tennessee, some of the lesser-known stories behind the nation's effort to develop the atomic bomb are now available online.

The Atomic Heritage Foundation and the Los Alamos Historical Society say the "Voices of the Manhattan Project" website is aimed at creating a central repository for the oral histories surrounding the tightly guarded World War II-era project.

While many previous examinations of the mission to create the atomic bomb, this retelling of the Manhattan Project isn't told from the perspective of star scientists and well-known generals, said Heather McClenahan, executive director of the Los Alamos Historical Society.

From testimonies about personal moral dilemmas on dropping the bomb to a glassblower talking about helping a frustrated Nobel Prize-winning physicist change a flat tire, the interviews seek to give a social history of the Manhattan Project.

"These were real people just doing their jobs and trying to end the war," McClenahan said.

The voices come from a variety of places, including Hanford, Wash., and Oak Ridge, Tenn. - which played prominent roles in the project.

In one testimony, Idaho native Larry Denton, who worked as a shipping clerk and reactor operator in Hanford said he was surprised see racial segregation between whites and blacks at the full-scale plutonium production plant.

"I'd never been around black people, and they had black people segregated from the whites. That didn't make sense to me," he remembered. "But that was a fact and they accepted it and the whites accept it."

In another video, Rebecca Bradford Diven, who developed a quartz fiber microbalance to weigh extremely small amounts of plutonium at Los Alamos, said women with children at the site were encouraged to work and received help from workers of nearby Pueblo Indian villages.

"The Army furnished transportation to go through the villages and the Pueblos to pick up day workers, laborers, janitors, Indian women to come up for maid service for apartments, and there was an office maintained," she said.

Veronica Taylor, of the Nez Perce Tribe, spoke in another video how life changed for American Indians in ancestral lands after the Hanford project got going.

"Those were hard things for us because I have never ever been approached by a military police person that had a gun in his hand and said, 'You can't go this way. You go back. Turn around and go back because you can't go on this road'," Taylor said. 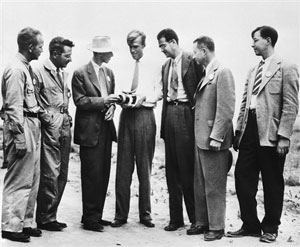 Some of the testimonies come from an earlier video project that is no longer in print, McClenahan said. Other testimonies were collected by the Atomic Heritage Foundation and are being digitized.

So far, 25 oral histories have been posted on the website and more are scheduled to be linked in the coming months.

Jason N. Krupar, a history professor at University of Cincinnati who has researched race relations during the making of the atomic bomb, said these new oral histories help give the public a better understand of the 150,000 or so people who were involved with the Manhattan Project.

"We need to hear from the glassblower in Oak Ridge and the construction worker in Los Alamos," said Krupar. "All played a role. It wasn't just about the stars."

Robert S. Norris, a senior fellow at the Federation of American Scientists and author of "Racing for the Bomb: General Leslie R. Groves, The Manhattan Project's Indispensable Man," said that the public remains fascinated about the Manhattan Project because it changed everything about warfare. Still, he said more research needs to be done on the "forgotten voices" who helped make the project a success.

"The time is ripe for articles and books on women, minorities, and children who were involved in the project," he said. "Not too much is written about them."