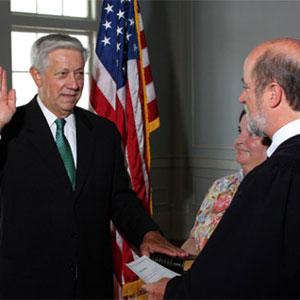 GULFPORT, Miss. (AP) - Mayor George Schloegel (SHLAY' guhl) took the opportunity of the Veterans Day holiday to apologize to families of African-American members of the U.S. military who weren't allowed to be buried in the city cemetery during times of segregation decades ago.

Schloegel appeared at a Veterans Day service in downtown Gulfport on Monday. The SunHerald reports that he honored three black men from the city who had died in Vietnam, but weren't allowed to be buried on city property.

The men were U.S. Army 1st Lt. Raymond Greene and Army Spc. 4 "Rickey" Casey who were both killed in 1970 and Army Pvt. Augustus Adams, who was killed in 1971. The mayor said it's likely there are others. He wanted their families to hear his message, too.

"Things have changed," Schloegel said. "We apologize for the past, but we recognize the future. We dedicate this day to those individuals who have experienced that travesty, but it will never happen again."

Gulfport Councilman "Truck" Casey, brother of Rickey Casey, was 14 years old when the Army came to his family's home to tell them Rickey Casey, who was 19, had been killed on his second tour to Vietnam.

"He was my heart, my big brother," Casey said.

Some of Greene's family also attended, but officials said they couldn't locate any of Adams' relatives.