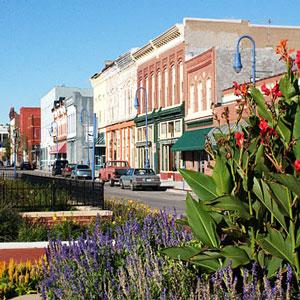 IOWA CITY, Iowa (AP) — Two black men wrongly convicted in the 1977 murder of a white Iowa police officer hope to prove something they couldn't during trials that sent them to prison for 25 years: that detectives framed them to solve a high-profile case.

During a civil trial that starts Wednesday in Des Moines, Terry Harrington and Curtis McGhee will argue that Council Bluffs police officers coerced witnesses into fabricating testimony against them in the killing of John Schweer.

Schweer was found dead while working as the night watchman at a car dealership. Harrington and McGhee, then teenagers from neighboring Omaha, Neb., say detectives used threats against a group of young black car theft suspects to trump up evidence targeting them because of their race and pressure to solve the retired captain's killing.

Despite little physical evidence, Harrington and McGhee were convicted at 1978 trials and sentenced to long prison terms. They were freed in 2003, after the Iowa Supreme Court found that prosecutors committed misconduct in concealing reports about another man seen near the crime scene with a shotgun. The key witnesses had also recanted their testimony, saying they were pressured into implicating the men.

After winning their freedom, they filed lawsuits against prosecutors and officers they blamed for forcing them to spend their adult lives in the Fort Madison prison. Their case reached the U.S. Supreme Court in 2009 over the issue of whether suspects have the constitutional right not to be framed by prosecutors. Before justices ruled, Pottawatamie County agreed to pay $12 million to settle claims against two former prosecutors while not admitting wrongdoing.

The settlement did not resolve claims against Council Bluffs and former detectives Dan Larsen and Lyle Brown.

The witness, Kevin Hughes, was aggressively questioned in Schweer's death after he was pulled over several weeks later driving a vehicle stolen from a Nebraska dealership. He first implicated three other men who had alibis before eventually claiming Harrington pulled the trigger and McGhee drove the getaway car after they went to steal a car from the dealership Schweer was guarding. Hughes said later he lied to get reward money and avoid being charged himself. Other witnesses also recanted.

Jurors will be asked to decide at trial, scheduled to last through Nov. 16, whether detectives, who were both white, and the city violated Harrington and McGhee's civil rights and, if so, how much they should receive in damages.

"We have waited for a very long time to have this trial and we look forward to having an opportunity to present our case," said Stephen Davis, an attorney for McGhee, now married and living in a Midwestern community he does not want to disclosure.

Facing a possible verdict of millions, lawyers for the detectives and the city are making an aggressive defense. They plan to argue that Harrington and McGhee probably were the real killers — and that even if they weren't, detectives did nothing wrong in focusing on them as suspects under the circumstances. 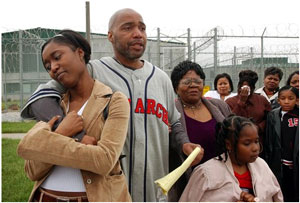 "There is going to be evidence that this civil jury will hear surrounding Terry Harrington and Curtis McGhee's involvement in this crime and it's evidence that the juries in 1978 considered," said attorney Kristopher Madsen. "But importantly, we believe there's going to be lacking any credible evidence to indicate these two police detectives in any way fabricated evidence or coerced or threatened witnesses or violated any civil rights of Harrington and McGhee."

The stakes are high for the city because recent court rulings have concluded it will have little insurance coverage if liable.

Lawyers would not say how much compensation Harrington and McGhee would seek, but they plan to show jurors a mock prison cell to illustrate their lives behind bars. Harrington's daughter, born after he was imprisoned, is expected to testify about the former high school football player's long dream of freedom.

A key question will be why detectives stopped pursuing suspect Charles Gates. Police reports about Gates had been hidden from the defense and were uncovered in 1999 by a former prison barber who became convinced of Harrington's innocence and worked for years for his freedom.

They showed that witnesses reported seeing a man with a dog carrying a shotgun near the crime scene, where Schweer's bullet-riddled body was found surrounded by bloody dog prints. In the nights before his death, the police reports show Schweer reported having altercations with a white man carrying a shotgun and walking a dog — something Gates was known to do.

Police questioned Gates, a 48-year-old loner, and he failed a lie-detector test. He had also been a suspect in an earlier unsolved murder. Investigators even consulted an astrologer about Gates, but ignored him after Hughes and other teens were stopped in the stolen car. Gates denied in a 2003 interview with police that he was involved in the slaying. Attempts to find Gates and reach him for comment were not successful.

"Larsen and Brown thought it was their lucky day. They could pin the murder on them, or use them to pin it on some 'ghetto dwellers'," plaintiffs' lawyers wrote, using a term detective Larsen once used to refer to Omaha residents. "Either way, Larsen and Brown would be putting blacks in front of a white Council Bluffs jury for the killing of a white Council Bluffs cop. That would mean case closed and they would be heroes."