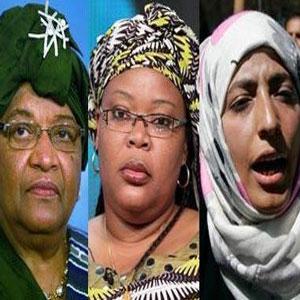 “We the women of Liberia will no more allow ourselves to be raped, abused, misused, maimed, and killed!” If these words are an indication of the ferocity with which Leymah Gbowee fights for human rights, it is little wonder she was awarded this year’s Nobel Peace Prize. She and compatriot/co-recipient, Ellen Johnson Sirleaf, though differing in their approach, remain united in their opposition to those who prey on women and girls.

Tawakkul Karman of Yemen was the third recipient of this year’s prize. The Nobel Prize Committee recognized all three women for their bravery in the fight for women’s rights, as well as a key element in the efforts to attain peace in the world.

No matter the country, though, and no matter the historical era, equality among the races on earth depends on women’s rights within the broader context of human rights. Despite a shameful history of race relations in America, for example, black men earned the right to vote in 1869. For women, of all colors, that right was not earned until a half-century later, with the passage of the 19th Amendment.

The Nobel committee, by design, helped improve relations within and between races with their award. Just as Tawakul Karman, is often described, as an activist thorn in the side of Yemen’s president, so will all those who fight for human rights remain thorny until the rose of peace has finally bloomed.

I applaud Ellen Johnson Sirleaf, Leymah Gbowee, and Tawakul Karman for standing up for their rights. Rape is not something to overlook. It does life changing damage that men do not understand. I find it disturbing and a shame that rape has been around since Roman times. The post even states that “Saint Thomas Aquinas acknowledged that rape was a sin” and yet, not much has changed. Most women are raped by people that they know compared to the belief that the victims’ attackers are strangers. The victims, when raped, are always under attack. They already have so much on their mind due to the attack and yet they are always blamed. Many assume that the woman, if known for being promiscuous, “wanted it”. Others blame the attack on the clothes a woman wears. Not all women want to attract the attention of men, but it happens. In other words, women are not to be blamed for being raped. They should be supported in any way to have them come to terms with the incident and I am happy that these three women are fighting for themselves.

This is truly important and I'm glad a moving like this is sparking in developing countries. This is a step to development and change that these nations need. It's hard for these women to embark what they want to do if they keep getting oppressed.