Issue of the Week LX: Do You Think the State of Health Care Among Blacks Is Evidence of Institutionalized Racism? 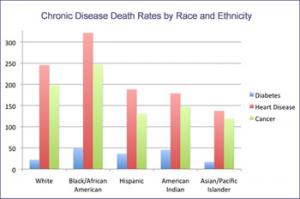 Blacks die at a higher rate from heart disease, diabetes and cancer than any other race or ethnic group. Photo Credit: patientnavigatortraining.org

While health care is in need of radical reform for millions of Americans, Blacks have historically suffered disproportionately from poor or non-existent access to even the most primitive of medical care, and it’s not getting better.

The data is just as grim for African-American women when compared to white women. Black women have a 34% higher chance of dying from breast cancer although only 10 % less likely to be diagnosed, as many have no access to health care; twice as likely to die from stomach cancer, and 22 times higher a chance of being diagnosed with AIDS with a 20% higher rate of death.

While 46 million Americans have no insurance, one assurance that can't be denied is the shocking numbers of minorities who become ill and die untimely deaths from otherwise preventable and treatable diseases.

"These disparities determine how long we live and how healthy our life is," said Thomas A. LaVeist, Ph.D., author of Minority Populations and Health: An Introduction to Health Disparities in the United States.

"Whites live an average of 5-7 years longer than blacks. African-Americans are more likely than whites to be victims of homicide and HIV/AIDS. Infant mortality is double for blacks. It's been that way since statistics have been kept," LaVeist said.

Those opposed to reform defy ignorance while ignoring that although the United States spends more on health care than any industrialized country, it ranks last in the quality of health among 191 member nations, according to the World Health Organization.

When rating a country's overall quality of health care, one of the most significant indicators of the population's health is the infant mortality death rate, and numbers are particularly grave for minority infants in the U.S.

For African-American babies, the death rate is 2.3 times that of white infants, and four times more likely to die from low birth weight. The data is most severe for Native-Americans, with the infant mortality rate topping whites by 48 %.

Sobering statistics reveal that although blacks only make up only 13.5 % of the civilian "non-institutionalized" population, they are 60 % more likely to die from a stroke than whites, and if they survive, they are more likely to become disabled.

What do you think?

Francesca Biller is an award-winning investigative journalist, writer, and commentator and has been covering politics, the arts, race relations, popular culture, multiculturalism and social issues for print, radio, television and the web for nearly twenty years. In addition to writing in-depth investigative pieces, Biller has now expanded her writing career to include critical essays, political commentary and satire, verse and blogs about her mixed heritage and culture. Her work can be found on many major news websites and on her own blogs. Currently, she is a special contributor for The Japanese American National Museum in which she writes exclusive articles about mixed race and identity.

I believe that the majority of these statistics happen within areas where "good heathcare" is hard to come by for any race. The lower class society in many cities and states probably have little to non existent health care for their people and with the rise in population the amount of money needed for bill may also be a problem. I believe that these statistics may be due to lack of available heath centers and doctors to diagnose these diseases.

I agree with STBONF2013-20 in their comment regarding the availability of health care. I was ignorant of the fact that so many people in our society are unable to get health care, and are therefore unable to treat these horrible diseases. Unfortunately, there are areas in our country that are very poor and sometimes the inhabitants of these places are predominately of the African American race. because they are more likely to contract diseases and illness, health care would be of a greater expense to them, and many are probably unable to afford it. I don't believe that skin color could impact one's health to such an extent, but rather the place in which they live, their availability to doctors, and their income.

First of all, unhealthy eating habits and lack of exercise causes numerous diseases such as heart disease and diabetes; therefore, I believe one cannot merely blame their genes and ethnicity for their poor health. It is the responsibility of each individual - no matter what race/ethnicity - to maintain their health and take preventive measures.

I believe that like the others said, that it doesnt have much to do with race, but rather living situation, money, and lifestyle decisions. Black people are capable of getting the same insurance coverage as any other person, it is just a matter of if they can. I think it is very naive to say that the poor coverage is a result of skin color.

I agree with most of the other posters. I also think that genetics may play a role. Some ethnicities are more susceptible to developing certain medical conditions simply based on genetics, such as sickle cell anemia. Health Care does play a role too however. the areas where this data was taken, good health care may be hard to come by.

"Whites live an average of 5-7 years longer than blacks. African-Americans are more likely than whites to be victims of homicide and HIV/AIDS. Infant mortality is double for blacks. It's been that way since statistics have been kept," LaVeist said.

For me, this statistic stood out of very powerful. You can see that better health care results in a longer lifespan. Although I agree with the other people that individual responsibility plays a big part in the quality of healthy person has. But also availability of information and knowledge, healthy food options, and preventative care knowledge and opportunities also must be made available. It's a whole picture, and I think that yes, blacks have traditionally been lower income where these things are not as much of an available option.