Conversation of the Week LX: Is the Use of Black Face instead of Black Models a Form of Racism? 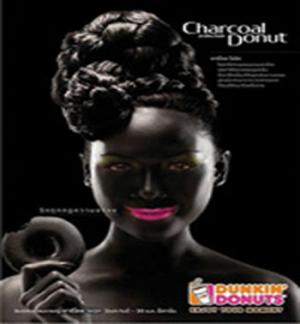 Apparently the fashion and advertising world didn’t learn anything from the bad press Vogue Magazine received when they ran a photo layout with black face models in April.

Now, Dunkin’ Donuts has apologized and pulled advertising for its campaign in Thailand that shows a black face model offering a chocolate doughnut with the caption: “Break every rule of deliciousness.”

The Thailand Dunkin’ Donuts initially responded that the outrage amounted to “paranoid American thinking,” and noted that their sales have been up in that country, but Human Rights Watch said it was unacceptable that an international brand advocate this style of marketing. The Dunkin’ Donuts corporate office in Canton, Massachusetts, recognizing “the insensitivity of this spot,” stepped in and ended the ad campaign. 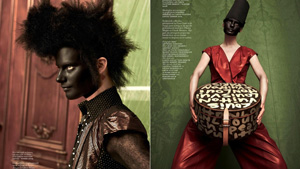 But the re-occurring black face trend may say something about the modeling industry’s hiring practices, as illustrated at New York Fashion Week during September.

According to the annual analysis by the fashion website Jezebel.com, while New York Fashion Week featured 4,637 “looks,” or outfits displayed on the runway, white models made up  80 percent of them. “That's a number that, if you look at the charts, we're growing familiar with,” notes the report, referring to the past four years of Fashion Week studies.

“Fewer than 1,000 looks were given to women who were not white, mostly black and Asian women, with some non-white Latina women sneaking in there,” according to the analysis. Women of other ethnicities, like Middle Eastern women, were barely seen.

Many of the same models of color who appeared this year were regulars in past years, suggesting the industry is reluctant to hire new models that aren’t white, but instead is relying on the same faces. And designers “boosted their numbers only because of a select black or Asian model who wore more than one look,” according to Jezebel.com.

Angered by the fact that diversity in fashion appears to be slipping rather than improving, ex-model Bethann Hardison recently launched a campaign aimed at outing designers who cast only white models. In an open letter sent in September to the fashion governing bodies in New York, London, Milan, and Paris, Hardison noted: "Eyes are on an industry that season after season watches design houses consistently use one or no models of color. No matter the intention, the result is racism."

The letter comes on the heels of British catwalk model Jourdan Dunn’s shocking July tweet that revealed she had multiple experiences being cancelled for catwalk shows for being "colored." That’s not a new experience: In late 2011, model Marcia Mitchell described on the Models Alliance website about being told by an agency, “We’re not doing black girls right now.”

Dunn told the Guardian September 23 she wants to speak up about the lack of diversity in casting: "The people who control the industry … say if you have a black face on a magazine cover it won't sell, but there's no real evidence for that. It's lazy." Dunn said that  "People think that all models get treated the same, but there is still a lot of bull-s*** that happens."

While the Civil Rights Act prohibits employment discrimination based on race, color, or ethnic origin, models are not covered by the majority of labor and anti-discrimination laws because they are considered “independent contractors” and are hired based physical appearance.

About the Author D.A. Barber spent nine years in Los Angeles as both a print and radio journalist (commercial and non-commercial radio). He received a 1981 Los Angeles Press Club Award for work on a two-part print series on smog, wrote for virtually every major publication in the area, and authored over 90 local and national radio reports as well as producing several weekly radio news shows - one which aired state-wide in California, and another state-wide in Arizona. Barber went on to briefly become news director for an east coast commercial radio station and feature writer for the Utica Observer-Dispatch before returning to the southwest as Program Director for a non-commercial radio station, producer of two non-commercial radio documentaries on environmental issues, writer for the University of Arizona, and writer/analyst for a Energytrend.com. Barber wrote for the University of Arizona News Services’ Report on Research for six years, and co-authored the first edition of Insider’s Guide to Tucson. His print material has appeared in a number of national and regional publications, including Backpacker, American Desert Magazine, New Age Journal, In Business, East West Journal, L.A. Weekly, Los Angeles Reader, Ecology Digest, Tucson Weekly, Inside Tucson Business, Biz AZ, and Los Angeles Herald Sunday Magazine, Huffington Post, and USAonRace.com.

The amount of insensitivity in the two cases (doughnut add and black models) is somewhat shocking. I'm shocked that Vogue would allow black-face to be a theme in a photo shoot. Really shocked. It seems very "Vaudevillian" in nature. And to say that "we're not doing black girls right now" . . . what exactly does that mean? Clearly "they" are, otherwise the use of black face would be seen exactly how it should be seen . . . as an incredibly racist and bigoted display. I can't believe that a black model would be told that she doesn't fit what is "in" at any point in today's world, and certainly not in light of the apparently expanded use of black face.

The amount of insensitivity in the two cases (doughnut add and black models) is somewhat shocking. I'm shocked that Vogue would allow black-face to be a theme in a photo shoot. Really shocked. It seems very "Vaudevillian" in nature. And to say that "we're not doing black girls right now" . . . what exactly does that mean? Clearly "they" are, otherwise the use of black face would be seen exactly how it should be seen . . . as an incredibly racist and bigoted display. I can't believe that a black model would be told that she doesn't fit what is "in" at any point in today's world, and certainly not in light of the apparently expanded use of black face.

I find it amazing that advertising agencies, modeling companies, or anyone in their right mind would think that it is okay to use black face. I would think that people would know that racism is obviously still a very sensitive topic and I'm not sure how this would help the cause. Personally, I don't even know the point of it, if the ad or model is intended to be black, then use a black person, not a white person painted black. I know that if a black person were to paint their faces white and have it in ads, the entire white population would go crazy and claim how that is so disrespectful. It is just unreal how people don't realize these things and that the ads can get past multiple reviewers without a single one saying it doesn't seem like a smart idea

This idea is crazy to me. How is it that by displaying some of their models in black face they see it as promotional but they refuse to cast women of color. They use the color when it is edgy or chic but when it comes to natural beauty they do not see beauty in the faces of non-white women. This use of blackface is wrong in my opinion because in history black face was used as a means to slander people of African descent. Black face brings with it harmful feelings of the past and should not be used as a promotional item. The fact that women of color are not being casted is wrong. The fashion industry prides itself on being top of the line bringing in new trends, so how could they stick to such a generic model for their styles. If they really want to be innovative they should bring in women of color to show how up with the times they really are. Also women of color are so beautiful that taking them out of the selection process early is not only discriminatory but also harmful to their own industry. If they want the most beautiful women they should look for those of all backgrounds and colors.

I also see no point in the use of "black face." I do not think it is intended to be racist but it definitly does come off that way. I thought that in recent years more dark skin modles were being hired, I do not see any reason for ads to use "black face" when they could hire a black woman and not fall in to the criticism of things such as this dialouge. It is something that was used to mock the race hence why people could be offended by it.

I cannot believe that this type of blatant racism is still around today. I am shocked that the model agencies flat out discriminated against non white models. I would have thought that with the increase in racial awareness it would decrease discrimination. As seen in this article this is obviously not the case. The fact the fashion industry used a "black face"instead of an actual black model is absurd and they deserve the criticism they received and more.

I think we need to remind ourselves of why and how Blackface was used in the past. In the early years of Hollywood, black actors were not allowed to act and white men in Blackface depicted black men. These white actors in Blackface helped instill in their viewers prejudices about African-Americans by acting in scenes in which they attacked or rape white, female characters. I believe that Blackface has symbolized a way to create and develop prejudices against African-Americans and therefore, has no place in modern, "post-segregation" society.

Blackface is mostly considered racist in any context. Blackface was used in the past to mock or incorrectly portray African features and culture. This is a sensitive topic for the Black community and should not be used in advertisements because it could convey the wrong message. Especially, print models should be cautions about wearing blackface because a picture is widely open to multiple interpretations. If the producer or director wants to use darker makeup then they should have no problem in using darker models to avoid controversy. In reality, blackface will most likely be considered racist even if it is not intend to have any racial connection.

Whether it was intentional or not I believe the Dunkin Donuts add definitely should of stirred up a lot of attention considering a white model was used to be painted black. I believe they should of just used a black woman to represent the add. The painting should of just seemed unnecessary in the first place. Modeling agencies are certainly dominated by white women which I believe is completely wrong when women of all color equally beautiful.

Although models with their faces painted black is a bit weird weird, i don't think it should have gotten this much attention. Fashion today is "interesting" these days and i think maybe people were being a little sensitive and over exaggerated a bit.

And plus the fact that it was an ad for chocolate covered doughnuts.. i just don't see a problem.

I thought that calling models independent contractors as a way to get around discrimination was interesting. I cannot believe that vote magazine or Dunkin' Donuts would do such a stupid advertisement. I am not American and I can see that these pictures are offensive and rude. I like that Thailand thought that it was just American paranoia but start an international body recognized overall it did not send a good message. I don't see any reason for why there are only white models, because the idea of fashion is to sell things. Women and men of all colors by clothing so it is stupid to not include them.

racism is always there no matter how hard people try to make it better. it's just so stupid.