Immigration Bill: What Is Financial Impact Of Not Harvesting Crops? 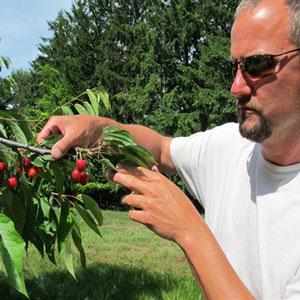 In this June 28, 2013 photo, Patrick McGuire of Atwood, Mich., examines sweet cherries growing in his orchard. McGuire says a labor shortage caused by the immigration controversy is making it difficult for him and other Michigan fruit growers to harvest their crops. Photo Credit: AP/John Flesher

ATWOOD, Mich. (AP) - For northern Michigan fruit grower Pat McGuire, the most potent symbol of the immigration debate isn't grainy television footage showing people slipping furtively across the U.S. - Mexican border. Instead, it's the plump red cherries and crisp apples rotting on the ground because no farm workers are here to pick them - a scenario that could become reality over the next couple of months.

Across the state's orchard belt, cherry trees already sag under the weight of bright-red clusters, but the trailers and wood-frame cottages that should be bustling with migrant families, stand empty. McGuire continues to wait and see if the crews will show up to pick his crop in mid-July.

"We're running out of time," he said, pulling aside leafy branches to inspect his ripening fruit, a mile inland from Lake Michigan.

From Christmas tree growers in the Appalachians to Wisconsin dairy farmers, and producers of California's diverse abundance of fruits and vegetables, agricultural leaders plead with Congress for an immigration bill that includes more lenient and less complex rules for hiring farm workers.

A measure that recently cleared the Democratic-led Senate contained provisions that the farm lobby said looked promising, and the Republican-controlled House will look at it shortly. With agriculture's once-mighty political influence in decline, and its workforce dropping to 2 percent of the population, it's uncertain how the industry will fare. Farmers' complaints about the shrinking labor pool are overshadowed by the ideologically charged issues of border security and giving legal status to illegal immigrants already living here. 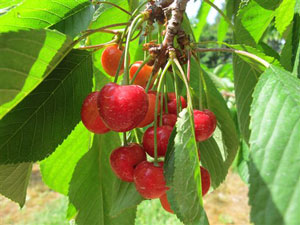 McGuire, 42, a self-described conservative who usually votes Republican, was among representatives of the American Farm Bureau Federation who made their case on Capitol Hill last week. His Michigan group went to the offices of eight lawmakers and to the Senate floor, buttonholing members or their staffers.

"Each office had their party speech," McGuire said, recalling one member's argument about border security. But the border must already be pretty secure, McGuire said, "because we don't have the labor in this country that we used to have."

Michigan farmers hire about 45,000 seasonal workers in the typical year, many of them illegal immigrants. With too few pickers available, some of the asparagus crop stayed in the field this spring.

In neighboring Wisconsin, immigrant workers make up more than 40 percent of the hired labor force at increasingly large dairy operations, according to a 2008 University of Wisconsin study. Kevin Krentz, who milks 500 cows near Berlin, said finding enough local help is a constant struggle.

The situation poses a test for the House GOP, said Tom Nassif, president of Western Growers, a trade organization that represents the fresh produce industry in California and Arizona. A Republican who held several positions in the Reagan administration, Nassif said some in the party are so concerned about illegal immigration in America today that they're sabotaging any chance for reform.

But if the House doesn't find something it can pass, he said, voters "are going to lose complete faith in the party's ability to legislate. All the national statistics show the American people believe in immigration reform."

The industry insists its chronic labor shortage isn't a matter of low pay, but too few Americans willing to deal with the long hours, hot weather, and other hardships of farm labor. However, with the hardships facing migrant farm workers, many of them no longer encourage their children to follow their family traditions of becoming farm workers.

"The truth is, not even farm workers are raising their children to be farm workers," Nassif said. 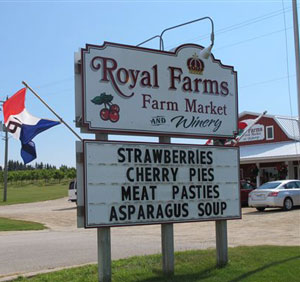 The Senate bill would allow experienced farm workers already in the country illegally to obtain "blue cards" making them eligible for year-round residency and ultimately citizenship, on a faster path than other people here illegally. Applicants who entered the U.S. illegally would have to pay a fine, catch up on taxes, and pass a background check. Another new program would allow farmers to hire foreign "guest workers," who would receive three-year visas.

But such policies might be a hard sell with House conservatives who deride the idea as "amnesty."

Rep. Justin Amash, whose western Michigan district includes the city of Grand Rapids and outlying farm country, is typical of Republicans feeling pressure from both sides.

Home-state farmers visited his Washington, D.C., office twice last week. Mark Youngquist, an apple grower from Amash's district, later gave one of his aides an orchard tour. During a town-hall meeting the same day, the second-term Republican described the farm labor shortage as "a problem we should deal with" and called for compromise on immigration.

But Amash's comment that deportation wasn't a realistic way to deal with all 11 million illegal immigrants drew angry shouts. "They're criminals," one man protested.

Youngquist, 53, another staunch Republican, said he wished his fellow conservatives were more sympathetic toward immigrants who fill jobs that no one else will take. The more intense border enforcement appears to be taking its toll, he said. His migrant labor housing that is usually half-full for the approaching apple harvest is now "at zero," he said. "We're sitting on a beautiful crop of apples. Unless things change, none of it is going to get picked."