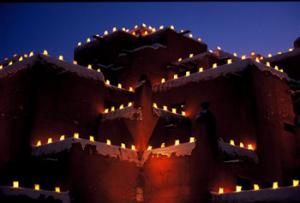 Christmas in New Mexico offers a great cultural mix of festivities and ethnic history in addition to what you might experience on any given day.

No matter when you visit New Mexico, the state's cultural mix is part of the appeal. Spanish colonial history, Native traditions and Anglo and Mexican influences are seen year-round in everything from architecture to food. But the Christmas season offers additional ways to experience this unique heritage.

Hallmarks of the holiday include the luminaria and farolito traditions. These candles, usually placed in paper bags weighted with sand, look like lanterns and are carried in nighttime processions or lined up along streets, driveways or rooftops to create a display. Luminaria can also refer to a bonfire, while the term farolito is more likely to be heard in Santa Fe and Northern New Mexico than in Albuquerque.

And while fir, balsam and pine perfume the air at Christmas in other parts of the country, here it's the scent of burning juniper and pinon.

Many places in New Mexico host annual events Christmas Eve and Christmas Day centered around the luminaria tradition. The main plazas of both Albuquerque and Santa Fe are decorated with thousands of luminarias.

Albuquerque offers walking tours of luminaria displays on Christmas Eve while Santa Fe hosts a procession called Las Posadas - which tells the story of Jesus. Spectators gather with candles in the city's historic plaza to watch the parade, which is followed by a "Christmas at the Palace" event at Santa Fe's Palace of the Governors. This event includes Hispanic, Anglo and Native traditions, from caroling to Native dances to an appearance by Santa and Mrs. Claus. Midnight Christmas Mass is held at the nearby Cathedral Basilica of St. Francis de Assisi. 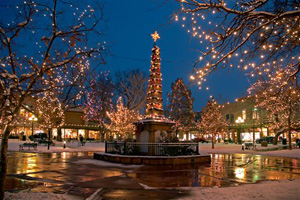 Also in Albuquerque, the River of Lights runs through Dec. 19 at the BioPark Zoo and Botanical Gardens, with a walk-through lighting display and entertainment.

Near Santa Fe and Taos, some of New Mexico's pueblos - the traditional Native communities that often date back centuries - hold dances during the winter months and some also host torchlight processions of the Virgin Mary on Christmas Eve with dances on Christmas Day and New Year's Day.

In Carlsbad, visitors can buy tickets for a boat ride down the Pecos River nightly through New Year's Eve (except for Christmas Eve) to see lights and decorations on houses and docks along the waterfront.

The 19th century gunman Billy the Kid was put on trial in 1881 in the Las Cruces area. Today you won't find outlaws here, but the Plaza at Old Mesilla will be lined with luminarias on Christmas Eve, and on Christmas, the historic, opulent Double Eagle Saloon hosts a feast.