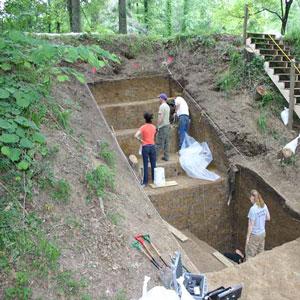 The 3,500-year-old Poverty Point site, considered one of the most culturally significant American Indian sites in the U.S., is already designated a National Historic Landmark, National Monument, and Smithsonian Affiliate. It is the largest, most complex U.S. archaeological site of its age. In addition to its impressive size and design, the site is outstanding because of its widespread trade network. The site’s design is unlike any other site in the world, including a massive earthen complex, with six mounds, six concentric, C-shaped ridges, and a large, flat plaza. Archaeologists have found evidence suggesting Native Americans built the largest mound, the Bird Mound, in less than 90 days. Photo Credit: crystalinks.com

A move to grant special recognition to a historical treasure in north Louisiana has oddly enough, become entangled in Middle East politics.

Poverty Point, a Native American landmark and a major part of American culture today in West Carroll Parish, is nominated for a spot on the World Heritage List, an international roster of sites that offer profound significance in world history. UNESCO, a cultural agency operated by the United Nations, administers the list.

Poverty Point includes earthen mounds presumably built by Native Americans at least 3,000 years ago. However, it will not be until next year before they make a decision on whether to include Poverty Point on the list. But the United States cut funding to UNESCO after Palestine was allowed to join the organization. Congress banned U.S. funding to U.N. bodies that recognize Palestine as a state before reaching an Israeli-Palestinian peace deal. If the United States continues to deny funding to UNESCO, then U.S. membership in the cultural agency could lapse.

Theoretically, Poverty Point's candidacy for inclusion on the World Heritage list could continue even if the United States is no longer a member of UNESCO.

But if the United States is no longer a voting member of UNESCO, then Poverty Point's chances of obtaining World Heritage status could suffer. The designation is significant because it's an important driver of tourism, which would be helpful in economically distressed West Carroll Parish.

Obviously, Poverty Point's involvement in the World Heritage list should not be the guiding factor in U.S. foreign policy. But we hope that this diplomatic intrigue includes a happy ending for Poverty Point, a historical treasure that deserves international acclaim.