Native American Tribes Use Technology To Save Languages 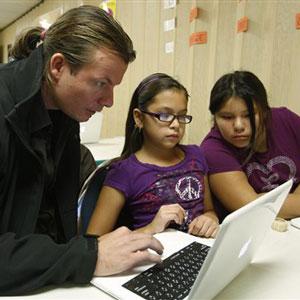 Native American Tribes Use Technology To Save Languages

LAS VEGAS (AP) - In a conference room in a Las Vegas casino, about three dozen people are swishing their fingers across iPads, trying out test versions of new apps.

But these are no Silicon Valley techies in town for one of the city's massive electronics shows. Many are from far-flung American Indian reservations, and their high-tech devices are serving a decidedly old-school purpose: trying to save their languages from the brink of extinction.

Experts say a growing number of Native American tribes are trying to revitalize their languages, which in some cases are spoken by only a handful of people. And increasingly, they're enlisting technology in the effort.

"We're in a race against time," said Lewis "Bleu" St. Cyr, 26, who attended the workshop to scope out the possibility of developing a language learning app for the Winnebago Tribe of Nebraska. "The goal is for younger kids to get interested."

Linguists estimate that about 200 Native American languages are spoken in the U.S. and Canada, with another 100 already extinct. In the early 1990s, experts estimated only 11 percent of tribal languages were still being passed traditionally from parents to children. The bulk of the surviving languages were spoken only by tribal members who were middle-aged or older.

Today, most tribes across the country are making an effort toward a language comeback, according to Leanne Hinton, a Berkeley linguistics professor and board member of the Advocates for Indigenous California Language Survival.

Those efforts include everything from apprenticeship programs that pair a fluent elder with a student to school immersion programs. Many also incorporate technology such as YouTube videos of native speakers or Google Hangout video chats for live, long-distance conversations.

St. Cyr, a media specialist for the Winnebago Tribe of Nebraska's Ho-Chunk Renaissance Program, says he's always on the lookout for creative ways to bring the Ho-Chunk language back to life. So far, he's worked up a language quiz game based on the show "Who Wants to be a Millionaire?" and has been using Facebook and YouTube videos to get young people engaged.

"The world is moving so fast with technology and our youth are the ones who are going to carry the language on," he said. "I think it's received pretty well."

The Ho-Chunk language-learning app is the latest idea he's brought to the table. If tribal leaders give the OK, the tool could be circulated among the approximately 2,600 tribal members who live on the reservation, as well as those who have moved away.

Such apps are advantageous because they use technology that most young people already understand, said Don Thornton, whose Las Vegas-based tech company staged the workshop.

Thornton Media is recognized as a leader in the tech side of indigenous language revitalization, developing translation devices, talking toys programmed in native languages and other tools over its 17-year lifespan. But Thornton says the biggest success has been custom apps for iPads and iPhones. 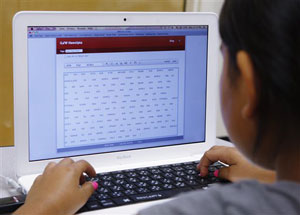 "It's the most flexible," he said. "Distribution is unlimited."

Since their first app of teaching Cherokee came out in the iTunes store in 2009, Thornton and his wife have worked with 170 different tribes, representing 70 or 80 languages.

For about $22,000 plus the cost of travel, company employees will fly out to a tribe, record native speakers and program the language into a 500-word or phrase app in about four days. They also can incorporate traditional songs and historical photographs.

While many tribes seem to be embracing the technology, the response wasn't always enthusiastic.

"When we started out, there was hesitance to use technology," Thornton said. "Sometimes people said it was the wrong way to go, that we should go straight through elders."

The company's next goal is to develop a video game that would require players to use a native language to survive in a virtual world. The first edition would be in Cherokee, which the Census Bureau estimates is spoken by about 12,000 people.

Language revitalization advocates say they applaud the new technology, but note it's just one part of broader efforts that could include mentorship, classes, and a community commitment to using tribal languages in daily life.

"It can be a very powerful tool in helping revive or revitalize endangered languages," said Inee Slaughter, executive director of the Indigenous Language Institute based in Santa Fe, N.M. "What we caution is that these are purely tools, and they do not substitute for a person's willpower and discipline to study and learn the language."

Slaughter, whose organization holds seminars on tribal language education, said she's witnessed a wave of interest in language renewal over the past two decades.

Experts point to the early- to mid-1970s as the effort's start, and say it got a boost when the Native American Languages Act, passed in 1990, declared the U.S. was committed to ensuring the languages' survival. Federal funding for revitalization projects was added in 1992.

Money can help tribes hire language teachers or pay for apps. The Pechanga Band of Luiseno Indians in California uses funds from its casino to pay for Luiseno language courses at nearby California State University, San Bernardino.

The Winnebago Tribe of Nebraska, with its robust Ho-Chunk Renaissance program, also runs an award-winning economic development program and owns the WinnaVegas casino in Sloan, Iowa. 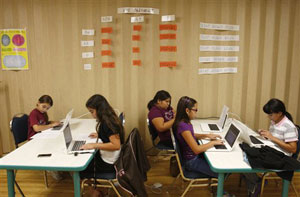 "There are definitely things you can do if you have more money," Hinton said. "But I also see tribes with plenty of money that don't do anything about language."

The most important ingredient, experts say, is willpower and a love for the language.

Louise Davis, who lives in northern California, is almost tearful when she describes hearing people using the language of her Pit River tribe in conversation for the first time. It happened years ago when an older man from another part of the state met up with her grandmother.

It was such a powerful, emotional experience that Davis is driven to use flashcards at home with her children and do whatever it takes to preserve the language.

"You can say things in our language that you can't say in English," she said.

"To know your native language connects you to your community and your history," Slaughter said. "In the long run you are helping your community ... retain that cultural identity."

I'm so glad to hear they are doing this. I read an article a while back saying, essentially, there is a dichotomy of identity between Native American culture- old and new. The new is culture and history, something that has meshed in with white culture and colonialization, the old is what their traditions are and always have been. Apparently there has been a struggle to find a balance between the two, but saving their dying languages, I hope, will help strengthen their culture.