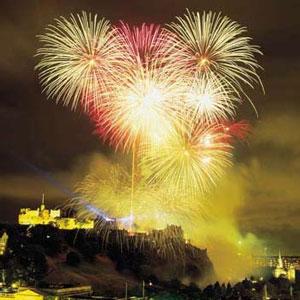 Celebrations in Scotland are something you will never forget.

Many years ago, my college roommate and I spent a year in England. As the New Year approached, we heard repeatedly, “You should spend the holiday in Scotland. They really know how to celebrate there. Everyone’s welcome.” They were talking of course, about “Hogmanay.”

We never did make it to the land of bagpipes and kilts, shortbread, Andrew Carnegie and wassail, lads and lassiestartans, and haggis, Loch Ness and whiskey, castles and isles (nearly 800 of them), highlands and bonnies that lie over the ocean. But, we never forgot the excitement and brimming descriptions of Hogmanay celebrations. The land of Peter Pan and J. M. Barrie still lures me, but now I will most likely visit via cyberspace.

Scotland, inhabited for the last 4000 years, has no written history before AD 79 when the region was known as Caledonia. The first recorded mention of Hogmanay occurred in 1604. Some believe the word originated from the French, and possibly, from “l’homme est ne” — the man is born, a reference to the birth of Christ, just a few days before year’s end. 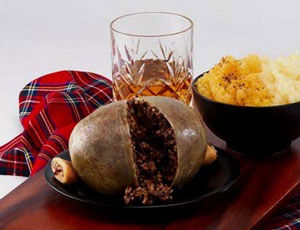 Welcome Tables
Like several other societies, the Scots are famous for the welcome table, a culinary statement that expresses hospitality, plentiful food, and the awareness that the dining experience is a chance to create bonds. A wonderful Scottish proverb asserts that whoever wishes to be a leader must also be a bridge. The Scottish table allows hosts and hostesses to lead the way and bridge the gap that temporarily separates friends and strangers.

Scots welcome people in ways big and small. Irene Heidenreich, vice president of the Scottish Heritage Society of Rochester, N.Y., recalls her childhood in Glasgow, known as The Friendly City. Hospitality was the first thing offered when she and her family visited the home of a friend or neighbor. They immediately put the kettle on for tea, she says, and arranged biscuits on a plate — no matter who came calling.

Heidenreich shares memories of the New Year’s celebration. “Homes open up to all, and legend has it that at midnight, the first person crossing the threshold should be a dark-haired man carrying a gift.

In my day, the gift was a piece of coal, which symbolized keeping the home warm all year long. All during the night, people go from home to home visiting family and neighbors. It was an especially exciting night for the children.”

A Kingly Tradition
Not surprising, the Scots remain historically linked to the idea of inclusion, especially for those less fortunate. A carol sung during the holidays mentions St. Stephen, even though John Knox put an end to Christmas in 1562 fearing it had pagan carnal practices that Puritans opposed; people all over the world still sing the carol. John Mason Neale, the warden of Sackville College, a home for the poor in West Sussex, wrote the ode to King Wenceslas. Neale’s good friend John Comper asked him to send sisters to St. Margaret Church in Scotland. The sisterhood, in much the same way as the King, administered to the poor.

The Burns Supper
Scotland’s exalted poet, Robert Burns wrote, “Auld Lang Syne,” which is sung by people all over the globe to celebrate the arrival of a new year. The song, not surprisingly, celebrates the hospitality for which Scots are famous. Not only do the words encourage strengthening the friendship bridge for acquaintances old and new, nearby and faraway, the words emphasize drinking from the cup of kindness.

For the past 200 years, suppers in honor of Rabbi (Robert) Burns happen during the last week in January, but the first supper occurred in July 1801, marking the anniversary of his death, when his friends assembled to toast his memory.

Recitation of his poem “Address to a Haggis,” is an important part of the Burns supper. In Burns’ day, haggis, a sausage/pudding dish, made from leftover parts of the sheep, was a staple for the poor. Today, restaurants offer many variations on the haggis-theme including the “happis burger” (fried haggis on a bun) or a “Flying Scotsman” (chicken breast stuffed with haggis).

Today, a sport called “haggis hurling,” is like the discus tosses that originated in ancient Greece. Alan Pettigrew held the Guinness haggis-hurling record for more than a quarter century. In 1984, on the island of Inchmurrin, Loch Lomand, he tossed a one-and-a-half pound haggis over 180 feet.

In our own country of record-breakers, “Steakbellie” Livingston set a world record by eating three pounds of haggis in a mere eight minutes in 2008. Whether seated at a welcome table or simply enjoying the tableau of Scottish culture, you’ll find yourself feeling blessed (especially if you have blessed the poor).