Like many national park excursions in the Southwest, the exploration is expected to be an immersion of ancient Puebloan culture — an admiration of expert sandstone craftsmanship, where villages survived and flourished amongst canyon walls in an inhospitable desert, (compared to today’s easily accessible lifestyle). Canyon de Chelly (pronounced d’SHAY) National Monument provides profound examples of ancient Puebloan culture along with an overwhelming illustration of the enduring chronicle of human persistence in the canyon from the Navajo (Dine) still calling the canyon walls home today.

Canyon De Chelly is a monument to the ancient Puebloans with sheer rock canyon faces harboring the ancient peoples’ culture. Amongst an amphitheater of rich history, the canyon is alive with the culture. The Navajo people struggle to maintain remembering their history, while surviving in a world focused on the future. On Navajo Nation, the Navajo fight contemporary issues of alcohol, crime, and drugs as employment and morale remain low. The strife of a changing environment is not new to Canyon De Chelly inhabitants; the ancient Puebloans also possessed their own struggles, including the climate then, and today, which is challenging.

However, both peoples found and continue to find a way to live in their world of difficulties, intrigue, and mystique. 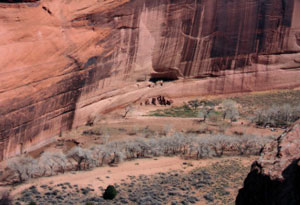 There is something about experiencing cultures long since gone. An individual accepts how miniscule ones’ life is when comparing it with the timeline of human existence. That one life may be viewed as minor, but an appreciation of being a part of the entire history of humans becomes apparent and valued, especially under the auspices of great human creations as demonstrated at Canyon de Chelly. The Navajo are privileged to preside in one of those great reminders where an individual is humbled by human perseverance — the phenomenal creation of a society, despite the struggles paraded by the ancient Puebloans.

This National Monument actually contains two canyons, Canyon de Chelly and Canyon del Muerto. The 84 thousand acre great house outlier of the Chacoan people is a historical trip starting in 700 A.D. Ancient Puebloan people found the canyon amiable to cultivating crops and rearing generations of families. With plentiful sandstone, the ancient Puebloans constructed multi-storied villages and kivas, sometimes in the most peculiar positions in the canyon, where entry into some buildings appears risky at best, and in many instances perilous. Walls abound with petroglyphs (rock carvings). Like other Chacoan settlements, the ancient Puebloans left the area in the 14th Century with archaeologists still debating the reasons for the exodus.

Hopi, the theorized descendants of the ancient Puebloans, began entering Canyon de Chelly in 1300 A.D. to grow crops like peach orchards and corn. Like the Chacoans, kivas were and still are important in Hopi culture.

The Hopi eventually settled on the mesa tops to the west of the national monument in 1600 A.D. The Navajo (an Athabasca group from Alaska and Northern Canada) settled present day Canyon de Chelly in the 18th Century, because the location was at the center of their four sacred mountains. Along with the ancient Puebloans, the Navajo existence in the canyon is also part of the Canyon de Chelly narration dictated to visitors to the national monument.

Along the South Rim Drive, one of the seven overlooks is an 800-foot tall spire known as Spider Rock, named after a Navajo legend, not ancient Puebloan. Spider Rock is the home of Spider Woman — a Navajo deity acclaimed to have taught the Navajo how to weave, which remains an important and persistent art today with Navajo rugs being a coveted and prized model of Navajo culture. The North Rim Drive, derived from a historical Navajo event, known as Canyon del Muerto, received its name in commemoration of the death of 115 Navajo in 1805. Seeking shelter on the canyon ledge, a Spanish military expedition shot the Navajo from a position above the Navajo atop the North Rim. 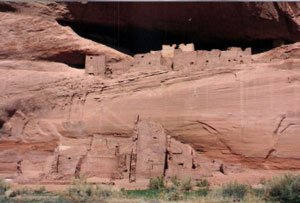 Today, 40 Navajo families live in Canyon de Chelly with their traditional homes (hogans), and crops visible to visitors to the national monument. Similar to the side-by-side overlooks of ancient Puebloan and Navajo history, Navajo artisans incorporate traditional Navajo culture with the ancient Puebloan beliefs in pottery, jewelry, and petroglyphs.

Artists abound at Canyon de Chelly where the ware is just the material portion of a sell. The artist also offers a narrative indicating the meaning of each symbol on a piece of work through a quiet story with words so light that the wind quickly captures and wisps them away to never to be heard again, if one fails to listen intently. In many cases the stories are direct reverberations from the artist’s grandmother, thus keeping alive the ancient custom of petroglyphs displayed on the canyon walls, Navajo artists carve and sometimes paint rocks, enabling the Chacoan culture to thrive even with the ancient Puebloan people long since gone.

Canyon de Chelly National Monument is inside Navajo Nation, the largest reservation in the United States covering 26 thousand square miles. Resiliency is necessary for any people inhabiting the canyon with such harsh living conditions, which the ancient Puebloans exhibited, and the Navajos continue to display today. While poverty is evident and the modern problems of alcohol, roving reservation gangs, unemployment, diabetes, and natural man-made conditions like drought, continue to burden the Navajo people, the importance of culture prevails as the traditional Navajo language is learned, and beliefs are passed down to the younger generations. Both the Navajo and ancient Puebloans were unable to control outside forces, but they both discovered however, that living in Canyon de Chelly (even with all the difficulties), strengthens the physical body, and the spiritual self is sustained in the sacred canyon home where intangible prosperity is achieved.