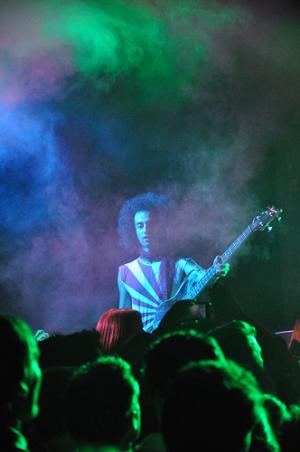 On June 21 each year, the entire city of New York pulsates with free musical events in hundreds of public spaces.

“Make Music New York” is one of the “Fete de la Musique” summer festivals that originated in France, and since its inception in 1982, this annual event has expanded to over 100 countries.

“People bring out their instruments and perform all over the city,” said Herve Salters, Paris-born musician and creator of “General Elektriks” band.

Now in its fourth year, Make Music New York (MMNY), held on June 19-21, as similar festivities marked the start of summer in 327 cities around the world.

New York musician and MMNY founder, Aaron Friedman, describes it as “a little like Halloween, where people spontaneously come outside and do their own thing.”

“Musical disruptions invite urban dwellers to abandon their tight routines and let the rhythms of the city take over,” wrote Alex Ross in The New Yorker. ”I would never hear, see, or feel anything like it again.” 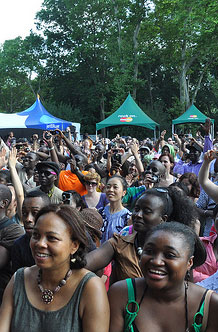 La Fete de la Musique events are enjoyed in other U.S. cities, but none approaches the magnitude of Make Music New York, with over 800 free concerts to enliven all five boroughs, on street corners, in parks, gardens, and parking lots.

Complementing the spontaneous, free-flowing music, several organized concerts are presented at MMNY, including World Music Summerstage, held in Central Park on June 20, French Rock at the Hiro Ballroom, and French Reggae and Haitian Music at SOB's, on June 21, were the three concerts this year.

Governor’s Island became “Punk Island” for the third time on June 20, with 130 of the country’s loudest bands creating hardcore paradise. Ferries provided free transportation every half-hour. “There are no decibel restrictions on the island,” says Amaury Laporte, Press Attaché at the French Embassy. “Music has universal appeal, and makes for a beautiful blending of cultures at this event.”

The World Reggae band, “DUB, Inc.” has members from various countries, says Zigo, the band’s drummer. “We’re from Benin, Algeria, Greece, and Italy, and based in St. Etienne, France, where there’s this huge melting pot. You can feel that in our music. In big cities, it’s hard to get people excited, but here in New York, the crowd was really positive. We could see the fans loving it.”

Zigo adds that the band’s vocalists sing in French and English, and Hakim sings in Kabylish. “Our music is enjoyed by people of many different cultures.” 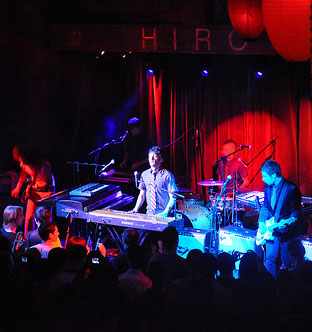 “It’s just as much fun here, playing with Americans,” Salters says. “Our main stage tool is high energy! We jump around, and get the audience pumped. I like playing vintage keys onstage, and touring the U.S. with ‘Blackalicious’ in 2001 and 2002 gave me a hip-hop influence, and I’m still doing some recording with them.”

Evan Hammer, Brooklyn songwriter and bass player, organized the three Second Line parades. About 50 to 100 people participated in each, as well as musicians, dancers, or marchers joining off the street.

In the morning, John Ellis, Grandpa Musselman & His Syncopaters, and Matt Perine led a parade around the Hudson Square district of Manhattan, while the Hungary March Band brought Lincoln Square to life in the afternoon, with festive costumes, and dancers pulling passersby in to join the fun.

Kiane Zawadi and the Hot 12 Brass Band paraded around Harlem in the evening. “This was a more traditional parade, with many performers improvising,” Hammer says.

Second Line dance has its roots in the Louisianan and possibly African-rooted Bambula, according to Hammer.

When Aaron Friedman first floated the idea of MMNY in 2006, city leaders were not enthusiastic, Laporte says. “It took most of that year to secure permits for events on so many streets, in parks, and on sidewalks.”

The French American Cultural Exchange sponsors the “Fete de la musique” events in the U.S. in partnership with the Cultural Services Department of the French Embassy.

As next summer approaches, check out Fête de la Musique listings in your region. You might find free concerts in your own neighborhood.

To learn about Second Line parades and dance, visit
History of the Main Line article at the Mardi Gras Digest