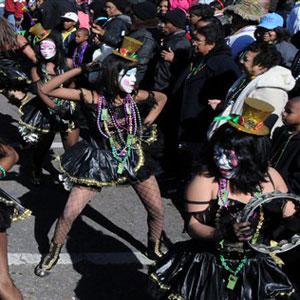 This 2010 photo provided by Jeffry Dupuis shows the Baby Doll Ladies performing in the Zulu krewe parade on Mardi Gras in New Orleans. Baby dolls – groups of women in skimpy or short, ruffled dresses – started with one group of African-American prostitutes wanting to one-up another on Mardi Gras 1912, but spread within decades to respectable black neighborhoods. The tradition had died out is seeing a modern revival. Photo Credit: AP/Jeffry Dupuis/New Orleans Society of Dance

The troupes of women strutting and prancing in bonnets, garters, and skimpy or short, ruffled dresses on Fat Tuesday also are being spotlighted in a new book and museum exhibit that trace their history and modern rebirth.

When the predominantly African-American Zulu krewe hits the streets on Fat Tuesday - Feb. 12 - its marchers will include the Baby Doll Ladies, a troupe formed after Hurricane Katrina. They play tambourines and cowbells to accompany their dance, a hip-hop style called bounce.

Though Mardi Gras celebrations date from the city's French founding in 1718, historians say the baby doll tradition started in 1912 when black prostitutes who worked just outside the legal red-light district called Storyville dressed up on Mardi Gras to outdo their legal rivals.

Storyville was closed in 1917, but the baby doll costumes caught on and survived for decades in family traditions of African-American neighborhoods.

In the years of segregation, blacks celebrated Carnival in their neighborhoods with informal parades of the brightly feathered and beaded Mardi Gras Indians, picnics and parties centered around the floats of the Zulu parade and costume traditions such as the baby dolls.

The end of segregation in the 1950s and '60s - and new economic opportunities - brought new avenues for African-Americans to participate in Mardi Gras. Debutante presentations at gala balls and more traditional float parades sprung up. And the revival of Lundi Gras celebrations the day before Mardi Gras brought together the monarch of the predominantly white Rex krewe to meet with the king of Zulu to toast the coming festival.

But not everyone forgot the dolls, or what they meant to Carnival in New Orleans.

One new group - the 504 Eloquent Baby Dolls of New Orleans, named in part for a telephone area code - will march with a tribe of Mardi Gras Indians and the Skull and Bones club, maskers clad as skeletons in another revived black tradition.

"I've got a wonderful group of women who want to educate our youth, who want to bring our culture back to the streets of New Orleans," said Denise Trepagnier, a heavy crane operator and part-time seamstress who organized the group.

Around New Orleans neighborhoods, you might catch a glimpse of other baby doll troupes with names like the Gold Digger Baby Dolls, the Treme Million Dollar Baby Dolls and the Ernie K-Doe Baby Dolls.

Trepagnier is planning a route for her group. But, unlike the float parades, many baby dolls go where the mood takes them.

Like Trepagnier, dancer and choreographer Millisia White had education as a goal when her New Orleans Society of Dance began performing as the Baby Doll Ladies in 2009. She said she first saw baby dolls as a child in the 1980s.

"That was my first glance of a woman out in the street, expressing herself independent of the men. That was exciting to me," she said.

Those baby dolls were likely the Gold Digger Baby Dolls, the first group in the revival. 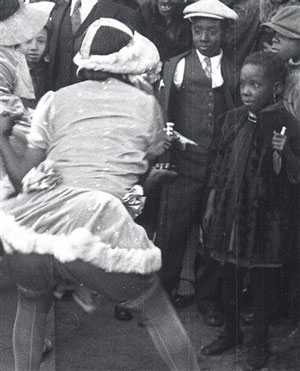 Trepagnier said she remembers seeing baby dolls until about 1962. After that, "they seemed to have disappeared. I didn't see any for a long time," she said.

The return of baby dolls is like the comeback of Mardi Gras Indian tribes, which started as raucous groups in black neighborhoods and now are a celebrated part of the Carnival season, said Wayne Phillips, the Louisiana State Museum's curator of costumes and textiles.

An exhibit about the origins of baby doll masking and the new groups reviving the tradition has just opened at the Louisiana State Museum. And the LSU Press has just released "The 'Baby Dolls: Breaking the Race and Gender Barriers of the New Orleans Mardi Gras Tradition" by Kim Marie Vaz, associate dean at Xavier University in New Orleans.

Beatrice Hill, a founder of the original baby doll troupes, gave an account of their birth published in the 1947 book on Louisiana folklore, "Gumbo Ya-Ya."

Hill told Robert McKinney, a researcher for the Depression-era Louisiana Writers project, that uptown prostitutes got word their downtown counterparts planned to dress and parade on Mardi Gras in 1912.

In Hill's account, the uptowners met at 3 a.m. one morning in 1912 to plot strategy against their rivals.

One jumped up, Hill reported, and said, "Let's be Baby Dolls. That's what the pimps always call us."

They hit the streets with cigars in their mouths and "money all over us, even in our bloomers," throwing dollars at men, Hill recounted.

The Louisiana Weekly, the newspaper of the New Orleans black community, identified the Million Dollar Baby Dolls in 1939 as among the city's oldest African-American masking groups, Vaz said.

Phillips figures respectable women were masking as baby dolls within 20 years of the 1912 escapade.

The earliest known photographs of baby doll maskers are cells from a 1931 film that doesn't make clear whether they were prostitutes or mainstream revelers, Vaz said.

"Even today, those in the Baby Boom generation recall their mothers and grandmothers warning them against the lewd and lascivious behavior evidenced by many a Baby Doll on Carnival Day," she wrote. 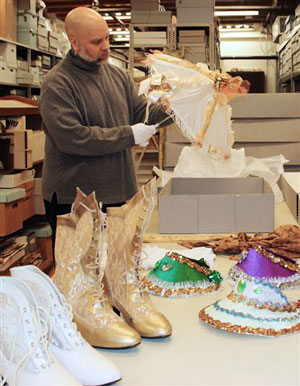 Perhaps taking a tip, though not their designs, from a booklet published in 1922 by the Dennison Manufacturing Co., some women wore costumes fashioned from crepe paper.

The first of the current baby doll troupes apparently started in the 1980s, when Merline Kimble and friends revived her grandparents' Gold Digger Club of baby doll maskers. The late Antoinette K-Doe created the group named for her husband, Ernie K-Doe, in 2003 with friends including Reed, Trepagnier, and praline store owner "Tee-Eva" Perry.

The revival of the dolls complements the long-standing street-marcher traditions of Fat Tuesday.

Among them are the revelers of jazz clarinetist Pete Fountain's Half-Fast Marching Club, the Jefferson City Buzzards, the Lyons Carnival Club, and others. Some trace their roots to Mardi Gras' raucous street celebrations of the 19th century.

Like the baby dolls, they'll be strutting their stuff and having a ball before the solemn season of Lent brings the revelry to a halt on Ash Wednesday.