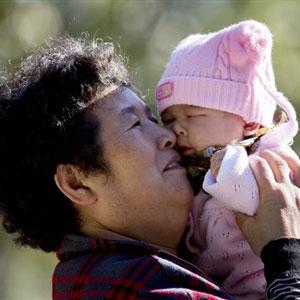 A Chinese woman plays with her grandchild at the Ritan Park in Beijing Wednesday, Oct. 31, 2012. A government think tank says China should start phasing out its one-child policy immediately and allow two children for every family by 2015. It remains unclear whether Chinese leaders are ready to take that step. Photo Credit: AP/Andy Wong

BEIJING (AP) - A Chinese government think tank is urging the country's leaders to start phasing out its one-child policy immediately and allow two children for every family by 2015, a daring proposal to do away with the unpopular policy.

Some demographers see the timeline put forward by the China Development Research Foundation as a bold move by the body close to the central leadership. Others warn that the gradual approach, if implemented, would still be insufficient to help correct the problems that China's strict birth limits have created.

Xie Meng, a press affairs official with the foundation, said the final version of the report wil be released "in a week or two." But Chinese state media have been given advance copies. The official Xinhua News Agency said the foundation recommends a two-child policy in some provinces from this year and a nationwide two-child policy by 2015. It proposes all birth limits be dropped by 2020, Xinhua reported.

"China has paid a huge political and social cost for the policy, as it has resulted in social conflict, high administrative costs and led indirectly to a long-term gender imbalance at birth," Xinhua said, citing the report.

But it remains unclear whether Chinese leaders are ready to take up the recommendations. China's National Population and Family Planning Commission had no immediate comment on the report Wednesday.

Known to many as the one-child policy, China's actual rules are more complicated. The government limits most urban couples to one child, and allows two children for rural families if their first-born is a girl. There are numerous other exceptions as well, including looser rules for minority families and a two-child limit for parents who are themselves both singletons.

Cai Yong, an assistant professor of sociology at the University of North Carolina, Chapel Hill, said the report holds extra weight because the think tank is under the State Council, China's Cabinet. He said he found it remarkable that state-backed demographers were willing to publicly propose such a detailed schedule and plan on how to get rid of China's birth limits. 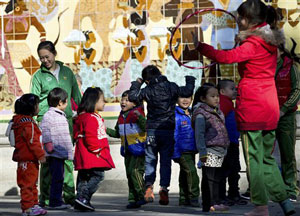 "That tells us at least that policy change is inevitable, it's coming," said Cai, who was not involved in the drafting of the report but knows many of the experts who were. Cai is currently a visiting scholar at Fudan University in Shanghai. "It's coming, but we cannot predict when exactly it will come."

Adding to the uncertainty is a once-in-a-decade leadership transition that kicks off Nov. 8 that will see a new slate of top leaders installed by next spring. Cai said the transition could keep population reform on the back burner or changes might be rushed through to help burnish the reputations of President Hu Jintao and Premier Wen Jiabao on their way out.

There has been growing speculation among Chinese media, experts and ordinary people about whether the government will soon relax the one-child policy - introduced in 1980 as a temporary measure to curb surging population growth - and allow more people to have two children.

Though the government credits the policy with preventing hundreds of millions of births and helping lift countless families out of poverty, it is reviled by many ordinary people. The strict limits have led to forced abortions and sterilizations, even though such measures are illegal. Couples who flout the rules face hefty fines, seizure of their property and loss of their jobs.

Many demographers argue that the policy has worsened the country's aging crisis by limiting the size of the young labor pool that must support the large baby boom generation as it retires. They say it has contributed to the imbalanced sex ratio by encouraging families to abort baby girls, preferring to try for a male heir.

The government recognizes those problems by trying to address them by boosting social services for the elderly, banning sex-selective abortion, and rewarding rural families whose only child is a girl. 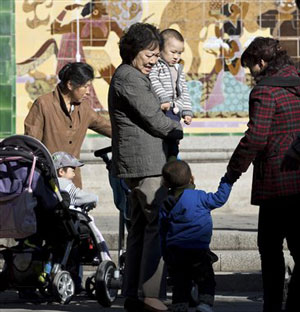 Many today also see the birth limits as outdated, a relic of the era when the state provided housing, jobs, and food.

"It has been thirty years since our planned economy was liberalized," commented Wang Yi, the owner of a shop that sells textiles online, under a news report on the foundation's proposal. "So why do we still have to plan our population?"

Though open debate about the policy has flourished in state media and on the Internet, leaders have so far expressed a desire to maintain the status quo. President Hu said last year that China would keep its strict family planning policy to keep the birth rate low and other officials have said that no changes are expected until at least 2015.

Wang Feng, director of the Brookings-Tsinghua Center for Public Policy and an expert on China's demographics, contributed research material to the foundation's report but has yet to see the full text. He said he welcomed the gist of the document that he's seen in state media.

It says the government "should return the rights of reproduction to the people," he said. "That's very bold."

Gu Baochang, a professor of demography at Beijing's Renmin University and a vocal advocate of reform, said the proposed timeline wasn't aggressive enough.

"They should have reformed this policy ages ago," he said. "It just keeps getting held up, delayed."