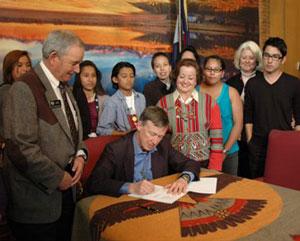 On April 16, 2012, Colorado Governor, John Hickenlooper signed a law that allowing the teaching of Native American language and culture in public schools. It is part of a larger global effort toward saving Native American and other languages, which have traditionally been lost through cultural assimilation. According to the United Nations Educational, Scientific, and Cultural Organization (UNESCO), a language vanishes every 14 days worldwide and, “if nothing is done, half of the 6000 plus languages spoken today will disappear by the end of this century.”

In Tucson, the University of Arizona’s (UA) American Indian Language Development Institute (ALIDI) has been the leader for 30 years of this endangered language movement and inspired similar programs, including the New Mexico Indigenous Language Institute, Advocates for Indigenous California Language Survival, Oklahoma Native Language Association, as well as programs in New Zealand, Australia, and Canada.

In the U.S., there are over 560 federally recognized tribes. The U.S. Census reports a population of about 1.9 million American Indian and Alaska Natives, with 5.2 million identified as American Indian native or in com¬bination with other races. There are 21 federally recognized tribes in Arizona alone, and the state is home to more than 250,000 American Indians. Among the threatened languages, an estimated 120,000 worldwide speak the Diné language of the Navajo Nation, which stretches from Northern Arizona to New Mexico. Others include Chemehuevi, a Southern Paiute language spoken by just three known individuals, and Mojave, a Yuman language spoken along the lower Colorado River by only 20 people. In fact, of the 139 native languages remaining in the America, there are only 70 spoken fluently, according to UNESCO.

But it’s not just Native American languages disappearing. Other threatened languages include Koro, spoken by less than 4,000 people in the northern region of India, and Aragonese, known to less than 10,000 people in a border region between France and Spain.

Languages as Culture
Traditional languages have a history of keeping cultures vibrant. But when immigrants settle here and there, those lose linguistic ties to their home countries disappear rather quickly. Historically, this was even a deliberate practice. But there is a stark difference when indigenous cultures in their homelands, such as Native Americans, lose their spoken language since they also risk future generations losing their cultural identity forever. For some languages and cultures, the window of opportunity to tap the last fluent speakers is rapidly vanishing.

“Humanity today is facing a massive extinction: languages disappear at an unprecedented pace,” according to the Endangered Languages Project. “With every language that dies, we lose an enormous cultural heritage; the understanding of how humans relate to the world around us; scientific, medical, and botanical knowledge; and most importantly, we lose the expression of these communities’ humor, love, and life. In short, we lose the testimony of centuries of life.” 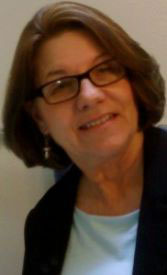 The Google Project
AILDI at the UA documents and promotes indigenous languages through training of educators, language researchers, and tribal leaders as part of the Consortium of Indigenous Language Organizations, which also includes the Indigenous Language Institute, Advocates for Indigenous California Language Survival, and the Oklahoma Native Language Association.

But the UA, as well as the University of Hawaii and Eastern Michigan University, are also part of the Google’s Endangered Languages Project, launched globally on June 20, 2012, to unite those working to preserve endangered languages. The site enables participants to store data, share research, and organize collaborative projects.

Susan D. Penfield, research coordinator for the UA's Center for Educational Resources in Culture, Language, and Literacy, serves as a member of Google's Alliance Advisory Committee which developed the new site to preserve more than 3,000 languages by “helping shape the site and ensure that it addresses the interests and needs of language communities," according to Google’s launch announcement.

According to Penfield, the Google project fills the void as a comprehensive place to go to “get up-to-date information on the status of world languages"

Endangered Languages Project website notes: “Languages are entities that are alive and in constant flux, and their extinction is not new; however, the pace at which languages disappear today has no precedent and is alarming. About half of the world’s approximate 7,000 languages are at risk of disappearing in the next 100 years. But today we have tools and technology at our fingertips that could become a game changer.”

Preserving languages is critical because whole bodies of scientific, cultural knowledge and meaning are usually embedded in different languages. Without preservation efforts, "we're losing knowledge, and we don't know for sure what else we're losing," Penfield said.

This reminds me of an article we read in my Comm class about how people that assimilate to their new homes tend to lose some of their culture. The first thing majority of the people do is take in the new language and learn it. Being of Hispanic dissent, I don't think we have assimilated to the American culture since we still have a lot of Hispanic traditions, but I do believe myself and my siblings have lost our Spanish. It's unfortunate because as new generations emerge, the least likely they'll know Spanish because English is spoken and heard most.