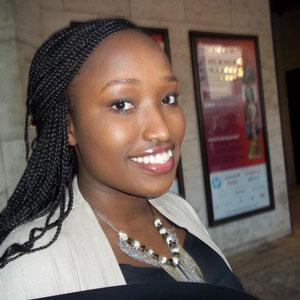 Sandra Uwiringiy’imana was one of the survivors in the massacre at the Congo refugee camp where she and her family were living. Photo Credit: imurenge.com

At the Women in the World Summit, held in New York City in March, Nobel Peace Prize winner Leymah Gbowee asked why American women were not more concerned about men’s role in discussions of reproductive issues. She asserted, “It’s time for women to stop being politely angry.”

International Monetary Fund Chief Christine Lagarde posited that if Lehman Brothers had been Lehman Sisters, the tragedy of the financial collapse would have been less painful.

Anne Kornblut, Deputy Political Editor of the Washington Post, suggested women acquire some of the “phony self-confidence that it takes to run for office.”

Iron Lady Academy Award winner Meryl Streep likened attendance at the conference to being plugged into an enormous “energy source.”

Secretary of State Hillary Clinton decried the fact that American women still have to stand up for their own rights. Citing the need for America to be exemplary in this regard, she urged attendees to “reject efforts to marginalize any one of us.”

Congressional Minority Leader Nancy Pelosi asserted, “We have to take the opportunity to make the change that is necessary so that nobody has to fight this fight again.”

And 16-year-old Sandra Uwiringiy’imana, a student at Our Lady of Mercy High School in Rochester, New York, spoke of a different kind of fight. She has first-hand knowledge of fighting for one’s life, for one’s liberty. She and her family were in a refugee camp in the Congo when armed soldiers attacked the camp, killing and injuring hundreds, most of them women and children. One of those massacred was Uwiringiy’imana’s six-year-old sister. The survivors, with the help of the United Nations, were ultimately placed in various locations, with the Uwiringiy’imana family in Rochester.

When the Summit organizers turned to the Internet to locate refugees in New York State, they found Uwiringiy’imana’s name next to photographs on display at the Visual Studies Workshop. They invited her to participate in the conference. 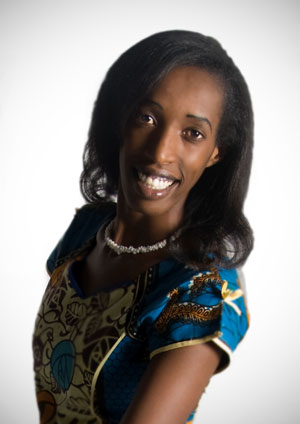 Those photographs by Uwiringiy’imana and Akex Ngabo, another survivor, form a collection called “Survivors. Their work will soon be a traveling exhibit in the Northeast and Midwest. It tells the story, visually and verbally of 20 Banyamulenge men, women and children, each of whom shared their story in audio interviews and photos. Uwiringiy’imana sees the pain behind the smiles of her photographic subjects; her sister Princesse Nabintu, co-curator of the exhibit shares Uwiringiy’imana’s eagerness to develop awareness.

Uwiringiy’imana is one of several students at Mercy whose enrollment was facilitated by Chojy Schroeder, a retired City School District teacher. Her teaching job required working mainly with non-native speakers, the majority of whom were refugee students and immigrants. She taught them basic English skills but also worked on curriculum and content areas. Her core goal was to prepare them for regular classes. “The greater a child’s native language literacy,” she explains, “the greater his or her ability to grasp the new language.”

Schroeder, who is still a fierce advocate for immigrants and refugees — despite retirement — recently returned from a trip to the state’s capital to show her support for the Dream Act, and other legislation affecting newly arrived Americans. “Those whose voices are heard the least,” she maintains, “are often the first to be cut out of funding.

“In my work, I come across many students who have a pervasive preoccupation with pursuing education. Amongst them, occasionally, I meet an extraordinary student, one who virtually glitters with a desire for knowledge. Sandra Uwiringiy’imana was such a student,” she remembers. "I first met her when she was in 7th grade. Immediately, I felt she needed more challenges than the current system was providing. Working with Mercy's president, Suzanne Johnston, an indefatigable source of support, and several others, we were able to fund Sandra's enrollment at Mercy.”

“Of course, I was aware of what was happening in her country. I had read about the atrocities that were part of the Congo’s history. Uwiringiy’imana’s story, sadly,” she remarks,” is not uniquely hers. It is the narrative of so many children that we meet every day. They may not know how to articulate their stories the way she does. They, perhaps, do not speak as flawlessly as she does now. But their histories are just as poignant, just as horrific.”

Those horrific stories have not darkened Sandra Uwiringiy’imana’s view of the world. Despite what she has seen, Uwiringiy’imana acknowledges the ineffectiveness of hatred. Instead, she urges that justice be “fought for and demanded.” Ideally, her demands and the demands of so many suffering throughout the world will be met, soon.