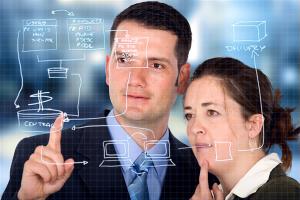 James Cunningham has two guiding principles for any potential entrepreneur: have a complete business plan and research the market for your product inside and out.

“Entrepreneurs need to make sure they have a well thought out business plan so they don’t embarrass themselves,” Cunningham says.

Anyone with an adequate business background might deem those principles as common knowledge. So why is Cunningham relevant? As executive director of Queen City Angels, an angel investment group based in Cincinnati, Cunningham is partially responsible for shaping scores of entrepreneur’s financial futures.

Nearly 87 percent of the 649,700 businesses launched in 2006 no longer exist, according to Small Business Administration statistics. While the reasons for closure run the gamut from the lack of paid employees to inadequate sales. But the lack of adequate financing is a chief concern — especially for African-American entrepreneurs. Sixty percent of black-owned business failed because they lacked the necessary initial funding, compared to 31 percent Hispanic owned and 24 percent of Asian-owned businesses.

While traditional financiers weather the storm surrounding the mortgage industry, a pipeline of angel investors and venture capitalists are available to those who dare tread the path of entrepreneurship.

Angel investors are classified as “high net-worth” individuals who invest personal funds into private sector business – typically those in the early stages of development. Although it’s common for many investors to act solo, many of them pool their resources to attract better investments.

How can one gain access to these groups? Many establish initial contact through business plans submitted via mail or Internet. At Queen City Angels, candidates are required to submit a five-page summary outlining their product, target market, sales strategy, management breakdown, ownership/control and capital needs.

The executive summary then goes to a screening committee who relay qualified applicants to the full committee of group investors. At least one investor must express specific interest in a particular company, Cunningham says.

As rudimentary as the process seems, the chances of actually securing angel capital is slim. Approximately 4.5 companies per year are approved for funding, according to the 2008 Angel Group Confidence report compiled by the Angel Capital Association (ACA).

So before you send that next great business plan, take these general guidelines into consideration:

Regardless of the limitations, Cunningham sees angel investors as critical to the nation’s entrepreneurial climate. “In the last few years, venture funds have gotten bigger,” he says. “That means that venture capitalists want to make bigger (investments). There’s a bigger gap.”

A gap that angel investors like Cunningham’s is glad to fill.

Most commonly, venture capital firms will create a limited partnership with investors. The firm secures funding from the investors as investments are made. Polaris Venture Partners, a Massachusetts based firm, manages $3 billion in funds.

Venture funds also maintain a stringent filtering process. For every 100 business plans submitted, only 10 are seriously considered and only one will be funded, according to a report released by the National Venture Capital Association (NVCA).

Matt Harris, managing partner of Village Ventures, advises entrepreneurs to invest significant time in establishing a leadership team. “The most important (element) is management,” he says. “Even the best ideas don’t work out unless people running the business are of high integrity.”

Harris also encourages willing entrepreneurs to perform “due diligence” and thoroughly research the firms before submitting a business plan.

In addition to Harris’ advice, listed below are general guidelines to consider before approaching a venture fund:

Greater Expectations — The range of investment funds available is $500,000 to $10 million. As a result, venture capitalists demand significant equity in a business. The earlier the investment stage, the more equity is required to convince an institutional venture capitalist to invest.

While the risks of involvement may seem extreme, the potential of becoming the next corporate giant may pose greater rewards. Some of the nation’s widely recognized companies were backed by venture capital including Apple Inc., Intel Corporation, Google, Home Depot, Staples and eBay.

“We think that America was built by entrepreneurs,” Harris says. “And we like to think that we are really darn important in creating the next generation of entrepreneurs.”