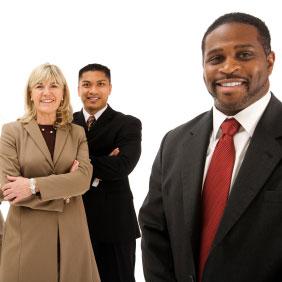 It is clear that the disparity is not solely the result of ongoing discrimination. The changing global economy presents new challenges to all entrepreneurs and like their majority counterparts, minority entrepreneurs will benefit from thinking about their businesses from broader, more informed perspectives. The Kauffman Foundation, based in Kansas City, is advancing minority entrepreneurship through programs, research and college campus initiatives, at the national and local levels.

An exciting development is the Urban Entrepreneur Partnership (UEP), which, with the support of the National Economic Council, the Business Roundtable and other agencies, will implement a pilot program to promote minority entrepreneurship and business development nationwide.

At the heart of these resource centers is an intensive coaching model. This type of coaching provides minority entrepreneurs with the education they need to stabilize and grow their businesses, including topics such as accessing debt and investment capital.

The UEP collaboration is taking place in four communities: Atlanta, Ga.; Cleveland, Ohio; Milwaukee Wis.; and the greater Kansas City area. Because the environmental, social, racial, ethnic and cultural diversity of these cities are so varied, national research into the reasons behind the successes and failures of minority entrepreneurs will need to be conducted.

In Kansas City, the program uses a model developed by the Kauffman Foundation known as Kauffman Coaches Programs. The coaching aspect of the program and the selection process for acceptance into the program provide innovative elements of our search for best practices in nurturing successful and sustainable minority businesses.

The foundation is establishing dissertation fellowships with junior and senior faculty on a number of campuses, including Howard University. Howard is a participant in our Kauffman Campuses Program and is working with the university to develop a learning model for minority student entrepreneurs operating businesses on campus.

Research has shown that firms owned by African-Americans and Latinos are slower to diversify and embrace opportunity in growth industries, less responsive to significant trends in supply chain management, largely sole proprietorships, and limited in their use of mergers, acquisitions and strategic partnerships. Twenty-five percent of all minority-owned businesses are in more traditional sectors, with lower revenue opportunity. Those sectors include personal services, food stores, trade contractors, apparel and other textile products, eating and drinking establishments and local and urban passenger transportation. However, an encouraging trend indicates that new minority entrepreneurs are entering industries with higher revenue potential, such as technology, communications, finance, insurance and real estate.

Financing can be particularly challenging for minority entrepreneurs, but research indicates that more opportunities may be available if
the entrepreneur is aware of options available. Likewise, venture capitalists and other investors can benefit from being more aware of the possibilities of profitable investments in minority businesses. In fact, minority enterprise venture capital investing is quite profitable, according to a 2003 groundbreaking study by professors Timothy Bates and William Bradford.

Closing the wealth gap-the disparate ratio of wealth between minority-owned and majority-owned businesses-is the theoretical goal of our minority entrepreneurship initiatives. Reaching parity in the wealth ratio requires a broad vision of entrepreneurship. Minority business owners focus on developing business solvency and solidifying the income stream, both of which are essential aspects of operating a successful company. Yet, business development is not necessarily the same as entrepreneurship that creates new ideas, new technologies and new industries to ultimately create new markets, new jobs and new wealth.

Procurement opportunities have a prominent role in efforts to grow minority business; however, those opportunities are truncated tools for eliminating the wealth gap. Ironically, a reliance on set-aside programs alone, whether through government or corporate contracts, can increase the revenues of minority businesses while actually expanding the disparate ratio of wealth. Minority entrepreneurs who are at the forefront of creating new industries and systems can be in a position to create the supply chain for their industries.

Innovation and creativity are the signatures of entrepreneurship; witness examples such as Bill Gates, Michael Dell, or the entrepreneurs who created the hip-hop industry. Their imaginative visions sparked new opportunities for many people from a variety of ethnic backgrounds beyond their own individual cultures.