How Are Hispanics Faring with Obamacare? 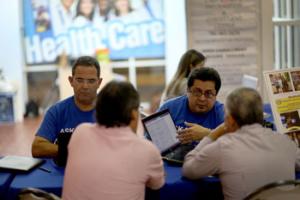 Hispanics account for about one-third of the nation's uninsured, but they seem to be staying on the sidelines as the White House races to meet a goal of 6 million sign-ups by March 31. Photo Credit: usnews.com

How Hispanics are faring with enrolling in Obamacare is gaining more attention as the end of the open enrollment period approaches. Does the nation's largest minority group risk being left behind by President Barack Obama's health care overhaul?

Hispanics account for about one-third of the nation's uninsured, but they seem to be staying on the sidelines as the White House races to meet a goal of 6 million sign-ups by March 31.

Hispanics are "not at the table," says Jane Delgado, president of the National Alliance for Hispanic Health, a nonpartisan advocacy network. "We are not going to be able to enroll at the levels we should be enrolling at." That's a loss both for Hispanics who are trying to put down middle-class roots and for the Obama administration, experts say.

Hispanics who remain uninsured could face fines, not to mention exposing their families to high medical bills from accidents or unforeseen illness. And the government won't get the full advantage of a group that's largely young and healthy, helping keep premiums low in the new insurance markets.

"The enrollment rate for Hispanic-Americans seems to be very low, and I would be really concerned about that," says Brookings Institution health policy expert Mark McClellan. "It is a large population that has a lot to gain ... but they don't seem to be taking advantage." McClellan oversaw the rollout of Medicare's prescription drug benefit for President George W. Bush.

The Obama administration says it has no statistics on the race and ethnicity of those signing up in the insurance exchanges, markets that offer subsidized private coverage in every state. Consumers provide those details voluntarily, so federal officials say any tally would be incomplete and possibly misleading. 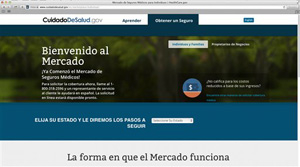 But concern is showing through, and it's coming from the highest levels. "You don't punish me by not signing up for health care," Obama told Hispanic audiences during a recent televised town hall. "You're punishing yourself or your family."

Only last September, three of five Hispanics supported the national overhaul, according to the Pew Research Center. Approval dropped sharply during October, as technical problems paralyzed the health care rollout and the Spanish-language version of the HealthCare.gov website. Hispanics are now evenly divided in their views.

A big Gallup survey recently showed tepid sign-up progress. While the share of African-Americans who are uninsured dropped by 2.6 percentage points this year, the decline among Hispanics was just 0.8 percentage point.

In California, where Hispanics account for 46 percent of those eligible for subsidized coverage through the exchange, they represented 22 percent of those who had enrolled by the end February and had also volunteered their race or ethnicity. The state is scrambling to improve its numbers in this week's home stretch. 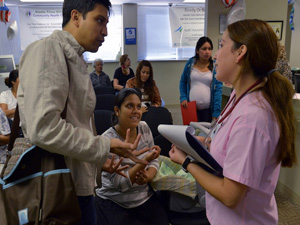 - A shortage of in-person helpers to guide consumers. "In our community, trust and confidence is so important – you want to make sure it's OK before you share all this personal information," Delgado said. There's been a lack of "culturally sensitive" outreach to Hispanics, added Rep. Lloyd Doggett, D-Texas.

- Fear that applying for health care will bring unwelcome scrutiny from immigration authorities. The health insurance exchanges are only for citizens and legal U.S. residents, but many Hispanic families have mixed immigration status. Some members may be native born, while others might be here illegally. Obama has tried to dispel concerns, saying information on applications will not be shared with immigration authorities.

-The decision by many Republican-led states not to expand Medicaid, as they could under the law. With states like Texas and Florida refusing to expand Medicaid, many low-income Hispanics will remain uninsured. However, Medicaid expansion is separate from coverage on the exchanges, which is available in every state. Hispanics don't seem motivated to sign up for that, either.

- Technical difficulties that delayed the federal government's Spanish-language enrollment site. CuidadoDeSalud.gov has also had to cope with clunky translations.

Delgado's group is asking the administration to extend the March 31 deadline for Hispanics who got tangled up in website problems. Officials say that's not likely. However, they haven't ruled out a little extra time for anyone who started an application but wasn't able to finish by the deadline.

A recent enrollment outreach event in Houston drew Mary Nunez, who works with her self-employed husband in the florist business. They have been uninsured since she lost her job last year. In that time, she's only been to a doctor once – to get a refill on blood-pressure medication.

"Praise the Lord, we haven't gotten sick," said Nunez, adding that she knows luck eventually will run out.

She made an appointment for in-person assistance to review her options on the Texas exchange. But since the couple's income fluctuates from month to month, she was uncertain how much they could afford. A deadline is looming, she noted, and "Hispanics always leave it for the last minute."

It has become so painful to watch Obamacare work unsuccessfully. I'm not sure if I agree with why the hispanics are not signing up for healthcare, but changes should be made to accompany the support of hispanics.