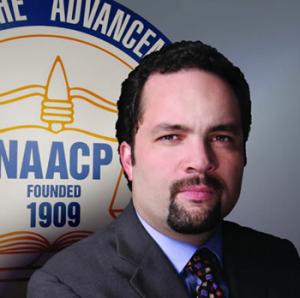 Ben Jealous, formerly the president of the NAACP, believes the tech industry can help Hispanics and African-Americans advance in society, and he hopes his new roll in venture capital will do more than simply inspire. Photo credit: naacp.org

A few months ago Benjamin Jealous was the head of the NAACP , the nation's largest civil rights organization, but hopes his new job as a venture capitalist will help provide exciting opportunities for blacks and Latinos in the booming tech economy.

"My life's mission has been leveling the playing field and closing gaps in opportunity and success," Jealous, 41, told The Associated Press before Tuesday's announcement. "I'm excited about trying a different approach."

Fred Turner, who studies culture and technology as an associate professor at Stanford University, said it's "fascinating that a person of his caliber and experience would move into this space."

Turner said there's a deep question going on in the U.S. about how to accomplish positive social change.

Jealous said he and his family will remain in Silver Spring, Md., but he'll commute to the West Coast about once a month.

Jealous, who was widely credited with improving the NAACP's finances, donor base and outreach, said he will never completely drop out of politics.

When he announced his departure from the organization in September 2013, Jealous said he planned to pursue university teaching and spend time with his young family. But Jealous says the opportunity to work with Kapor Capital was just too tempting, putting him on the cutting edge of helping people who are slipping further behind as the national economy grows.

The divide is greater in the Silicon Valley than the rest of the country. Blacks and Latinos, already earning about half as much as whites and Asians, saw per capita income drop 5 percent for blacks in the past two years, and 2 percent for Latinos, according to an annual Silicon Valley Index.

The disparity is clear when it comes to jobs as well. Just 4 percent of the nation's 1.1 million software developers are black, and 5 percent are Latino, according to the Bureau of Labor Statistics.

"The Silicon Valley holds itself up as a meritocracy, but it's actually embarrassingly un-diverse," said Freada Kapor Klein. "We expect Ben is going to help us change that."

Kapor Capital's portfolio currently has 46 percent of its investments in firms with founders who are women and people of color from an underrepresented background.

Mitch Kapor said Jealous' ability and understanding about how to make a social impact will be a huge asset to the firm's investment goals.

Kapor said he looks for companies that are "closing gaps of access and opportunity for underserved communities or involve a disruptive democratization of a sector."

These include Pigeon.ly, a startup that offers low-cost phone and photo sharing for prisoners and their families outside, and Regalii, an international remittance platform that helps immigrants send money to their families in Latin America.

Jealous grew up in Pacific Grove, about 100 miles from the Silicon Valley, during the pivotal years when personal computing was just starting to gain traction. He was captivated and chose a long commute, on foot and by bus, to attend a magnet school for computer science.

For his new job, Jealous said he's going to be getting a crash course in technology, investing and even software coding.

"I'm going to have a computer coding tutor for the first time since I was in fifth grade," he said.